I would like to be remembered as a person who wanted to be free… so other people would be also free.
– Rosa Parks 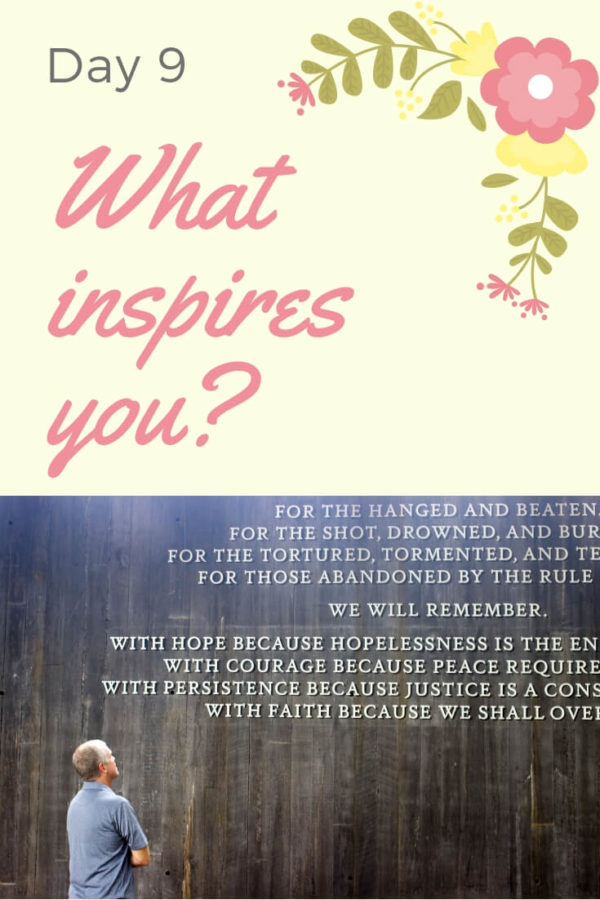 For the hanged and beaten. For the shot, drowned, and burned. For the tortured, tormented, and terrorized. For the abandoned by the rule of law. We will remember. With hope because hopelessness is the enemy of justice. With courage because peace requires bravery. With persistence because justice is a constant struggle. With faith because we shall overcome.

I was fighting back tears.

We hadn’t even paid to enter the museum yet. But standing there in front of the cashier, I wanted to just hug her and cry.

I am white. She is black.

And I’m at the entrance to The Legacy Museum.

It’s the brainchild of Bryan Stevenson, the inspiring lawyer who heads the Equal Justice Initiative and author of the everybody-must-read-this-book Just Mercy.

The location itself is chilling.

The museum is built on the site of a warehouse that once housed slaves in Montgomery, Alabama. Montgomery was the capital of the domestic slave trade in Alabama. And Alabama was among the top two slave-owning states in the United States.

That should be enough to make anyone cry.

But it gets worse. Once inside, we listened to holograms of former slaves inside jail cells, shackled and worn. They told their stories. They pleaded for our help.

We then walked past exhibit after exhibit of hard things, horrible things, things that should never have happened.

It doesn’t end with the past though. The museum continues forward into this era of mass incarceration.

You can sit across the table with a video of a prisoner. Pick up the phone, and he tells you his or her story. You’ll cry again.

We later walked through The National Memorial for Peace and Justice. It’s dedicated to the thousands of lynched African-Americans.

If a lynching was documented in your county of the U.S., there is a heavy steel monument hanging from the ceiling with your county’s name and the names of the lynching victims.

There are over 800 monuments here, representing over 800 counties in America where over 4,000 human beings were documented to be lynched by other human beings.

That doesn’t include the undocumented. Only God knows that number.

I looked for my county. It was there. 3 names.

I wondered about their stories. About their mamas. About their children…and the children they didn’t get to have because their lives were cut short by lynching.

On the other side of the structure are corresponding steel columns laid in rows on the ground. These are only temporary. They are there until a representative of each county claims their monument and establishes one on their own soil.

We then left Montgomery and drove to Selma, Alabama. We walked across the Edmund Pettus Bridge.

Our history has multiple dark chapters.

Yet God always brought hope. And little by little, with hope came change. And with change came healing.

He inspires them to never give up.

Keep breathing him in. Be inspired. Press on.

Here are our three questions of the day:

(1) What book have you read more than once?

(2) What speaker or pastor or friend inspires you?

(3) What is God inspiring you to do in this season?

What are your answers? Please share in the comments.

(1) Desiring God and Future Grace and The Power of Now

(2) This week I’m inspired by the courage of “Science Mike” (Mike McHargue). He’s begun telling his own story of being sexually assaulted, even though he’s not ready to tell it fully now. Or maybe ever. It happened years ago. And that makes no difference. Listen to episode 163 of Ask Science Mike, Sexual Violence. He’ll inspire you, too.

(3) God is inspiring me to lean in to hear hard stories and to look for ways to make a difference, however small they seem.

Watch about The Legacy Museum here

Equal Justice Initiative Racial terror lynching has a legacy that must be confronted.

Watch more videos about the Museum and the Memorial here

Get the whole Handmade series here

17 thoughts on “Breathe in the Inspiration – Day 9 of Handmade”