When a soldier goes to war, a family goes to war.
– Linda Cope
Founder & President of Warrior Beach Retreat 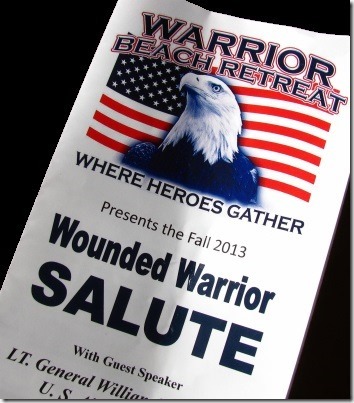 One by one, they walked down the center aisle. If they could. Some had no legs; they were in wheelchairs.

Others came slowly with canes. Some had dogs by their side.

And still others looked strong on the outside. But you knew they carried deep wounds on the inside.

They were twenty-five of our combat-wounded warriors from the Iraq/Afghanistan war, along with their spouses or caregivers.

They were in Panama City Beach, Florida, for a seven-day retreat. To rest. To connect. And to heal.

The streets had been lined earlier as a parade route filled with flags and smiles and waves. Welcoming. Celebrating. Honoring these military heroes.

Because when someone gets hurt for the cause, they deserve an extra salute.

And shouldn’t we all participate in the healing of the wounded?

We all know wounded warriors. Not only from physical wars. Other battles—spiritual, emotional, mental—are just as real and cut just as deep. The wounded fall every day in families. In jobs. At churches.

Let’s honor them too. They also need healing. Lend a hand to help a struggler up.

And when the injured are us? Because who hasn’t been cut? We need to seek help from others. Acknowledge our pain. Find beauty in scars.

To remind us that none are broken beyond repair . . .
no circumstance has the final word . . .
and no wound is beyond healing . . .
when God is invited into it.

He makes all things new again.

At the conclusion of the ceremony for the Wounded Warriors, the servicemen and women and their caregivers (and wheelchairs, canes, and dogs) lined up in the foyer of the church building. One by one we got to meet them, shake their hands, and say, “Thank you for your service.”

So to all wounded warriors, regardless of your battle, I say, “Thank you for your service. It’s an honor to know you. And may God bless you as you heal.”

Because your beauty is deeper than two perfect legs or an unscarred complexion or a head devoid of PTSD.

When God is for you—for us—none can stand against.
He is and will be victorious.
We’re all in this together.

Will you pray for these warriors too? They’ll be returning to their homes tomorrow. And their battles will continue.

39 thoughts on “Honor the wounded”