Whatever the reasons, this story of Anthony Hinton has me.

What did he want to do first? One thing was visit his mother’s grave (she died 13 years ago). His attorney Bryan Stevenson said, “Of all the things he has endured (on death row), the death of his mother caused the most pain.”

After years of battling for a new trial to prove his innocence, Hinton finally was granted the opportunity by the U.S. Supreme Court in 2014. But after several months, the prosecutors dropped the case altogether, citing lack of evidence.

Stevenson, executive director and founder of the Equal Justice Initiative, hopes this will encourage Alabama to establish a conviction integrity unit to investigate claims of innocence like many other states are now doing.

And when Stevenson talks, we need to listen.

“‘You can’t understand most of the important things from a distance, Bryan. You have to get close,’ she told me all the time. . . . how easily we condemn people in this country and [create] injustice when we allow fear, anger, and distance to shape the way we treat the most vulnerable among us.”

“Proximity has taught me some basic and humbling truths, including this vital lesson: Each of us is more than the worst thing we’ve ever done.”

Hear him in Just Mercy, his best-selling non-fiction book published in 2014. His stories will dig into your soul and won’t let go. 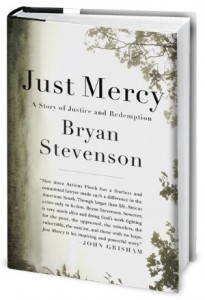 And when you listen, in your own brokenness, find yourself drawn too to those least likely to be heard: the poor, the mentally-ill, the weak, the hopeless.

“I told myself that evening what I had been telling my clients for years. I am more than broken. In fact, there is a strength, a power even, in understanding brokenness, because embracing our brokenness creates a need and desire for mercy, and perhaps a corresponding need to show mercy.“

“I turned off the radio station, and as I slowly made my way home I understood that even as we are caught in a web of hurt and brokenness, we’re also in a web of healing and mercy.

I thought of the little boy who hugged me outside of church, creating reconciliation and love. I didn’t deserve reconciliation or love in that moment, but that’s how mercy works.

The power of just mercy is that it belongs to the undeserving. It’s when mercy is least expected that it’s most potent—strong enough to break the cycle of victimization and victimhood, retribution and suffering. It has the power to heal the psychic harm and injuries that lead to aggression and violence, abuse of power, mass incarceration.

I drove home broken and brokenhearted about Jimmy Dill. But I knew I would come back the next day. There was more work to do.”

May we all keep coming back one more day.
There is always more to do.
Including praying—Anthony Hinton needs it as he readjusts to life on the outside.

“I told those gathered in the church that Walter had taught me that mercy is just when it is rooted in hopefulness and freely given. Mercy is most empowering, liberating, and transformative when it is directed at the undeserving. The people who haven’t earned it, who haven’t even sought it, are the most meaningful recipients of our compassion.”

I’m certain of this: Just Mercy will be in my top 10 list of most impactful books I read in 2015. I hope you’ll find a copy and read it too.

And how timely! The Red Couch at SheLovesMagazine is hosting a book club for Just Mercy that is starting now.