You have 15 minutes before your home is destroyed. What possessions do you grab? Baby albums? Your purse? Jewelry?

But what if it’s my house you’re going through, not your own? How would you know what’s important to me? You might not know to grab my Kali shadow box off the living room wall, or where to find the home videos or the external hard drive with all my photos.

So as I walked down the gravel road Friday in the Coxey community to where Chasady’s home stood earlier in the week, I wanted to know more about her before we started picking through her belongings. 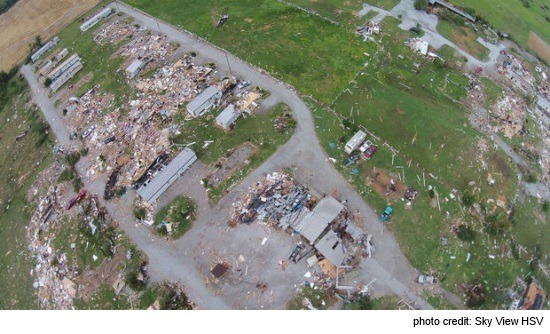 I found out she has a job, she has a son, and she has an awesome cousin (also with us) who was helping her out.

Chasady said she usually ignores storm warnings. But something was different Monday afternoon. Somehow she knew she needed to leave altogether this time instead of just walking to the nearby storm shelter.

If she hadn’t, she wouldn’t even have her car now, the only thing she owns that she assumed was not destroyed by the EF-3 tornado, one of 20 that touched down across central and northern Alabama on April 28, 2014, (three years and one day after the deadly 62 Alabama tornadoes of April 27, 2011).

She couldn’t imagine anything of value remaining. And as we passed other homes on our walk, we saw little reason to hope. 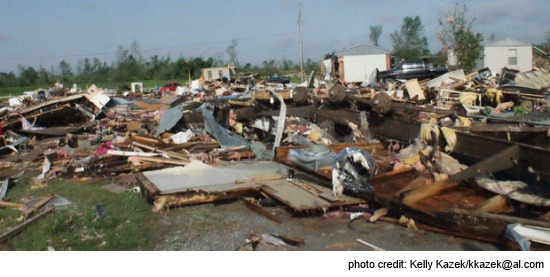 But when we got to her place, and started picking underneath the twisted metal and wet wood, we were surprised not only to find one of her shoes, but also its match a few feet away.

And the more we looked, the more we found. Purses, shampoo, a pink hair bow (whose? not hers), a package of bologna, a throw rug. And many more shoes.

I wasn’t sure what to put in the keep pile and what to trash. This angel figurine? Washcloths buried in mud the last four days? A “Mrs. Potts” toy? All dirty, but salvageable with some cleanup.

It’s hard to know what is important to someone else when you don’t know them.

But I’d rather save too much now and let her throw it away later, than throw away now what she could never retrieve later.

After we’d rescued what we could, Chasady kept digging for two more things: her DVDs of The Bible miniseries and a brand new box of contacts she’d bought days earlier. These were things important to her.

We found neither by the time I had to walk away. She allowed me to pray a blessing over her. We cried. We hugged.

Then I drove home to my intact house, took a hot shower in my clean bathroom, and put on dry clothes from my own closet.

And I lay on my bed and cried some more.

We’re rarely in situations that require big decisions like what to salvage after a tornado.

Yet we ALL face mini-decisions DAILY of whether to value or demean what’s important to somebody else by the attention we give or withhold.

Better to pay more attention than not enough. Show more care than too little. Jesus said don’t just give up your shirt, give up your coat as well; go the second mile (Matthew 5:40-41).

How can you honor someone else’s valuables today? Look at photos of their grandkids? Ask about their newest body pain? Listen to their marriage problems?

If someone matters to you, let what matters to them also matter to you.

54 thoughts on “It matters to me. Does it to you? {Alabama tornadoes}”