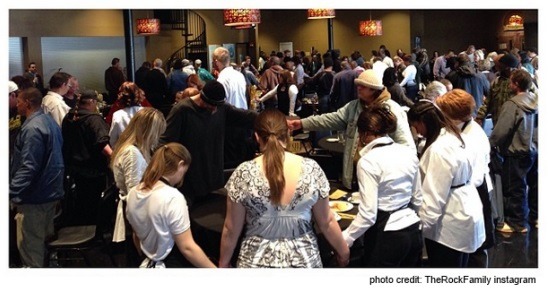 The professional caterer walks to our table next. He needs to fix a few pre-meal errors we’d made—face each knife in the right direction; put the napkins on the correct side; turn all the chocolate candies label-side-up.

We are aiming to do all with excellence. Our guests will be arriving soon. While they might not notice those little things, we would.

It isn’t meant to be an ordinary Saturday. God is scheduling divine conversations around each table.

Am I about to get mine?

Jay (not his real name) is the second guest to be seated at our table (the first guest is another story, another day). Vivian and I welcome him, as he extends his hand and introduces himself, repeating our names to make sure he gets them right.

The first thing I notice about Jay is his contagious smile (and, admittedly, the second thing is his braided goatee). But the thing that stays my attention is the apparent joy in his heart and peace in his soul.

So I pull up a chair myself.

I need to listen deeper.

Jay and I discover we grew up about five miles from each other. Our high schools played each other in basketball and football. Afterwards he’d joined the army and spent most of his career in Germany, fond years that he mentions often.

He eventually returned home to Alabama and settled in a house with family until our tornadoes of 2011 took it out. Sometime after that he ended up on the street.

He’s lived homeless ever since.

He says he made friends with some in the homeless camp who were kind to him. They added to his Army knowledge of how to survive. But he keeps mainly to himself these days.

He apologizes several times for talking too much—he doesn’t often have someone who will listen to him, he says.

But I tell him don’t be sorry for that.

In hearing others, we often hear straight from God.

He says God has been good to him through the years. Indeed, I don’t detect any of the demons that so often haunt those I meet from the homeless community, either from substance abuse or mental illness. His mind is sharp and his character seems straight.

He attends a Bible study every Tuesday with some of his friends. One of his heroes is King David. He tells me some of his favorite stories.

After everyone has eaten, we pack up leftovers in take-home boxes for the men and women to take back to their woods or to Tent City, along with gift bags of socks, lotion, peanut butter crackers. Jay is grateful for his (and for the multiple helpings of banana pudding he ate for dessert).

But one thing still remains. Pastor Chris wants to offer a blessing over our friends—some new friends, some old ones—and invites us all to make a circle.

As I hold Jay’s hand through the prayer, I hear God reminding me:

We’re all more alike than we are different; isn’t that a blessing?

So when the prayer is over, I tell Jay how much he’s blessed me. He says the same. He says if it’s God’s will, hopefully we’ll meet again. I do hope so.

Because in listening to Jay’s story this Saturday morning, he became part of my own; and I, his.

I hear more than “homeless veteran” and more than “server-for-a-day” at King’s Banquet—what I hear is two unlikely strangers are now friends.

And that’s always good to hear.

15 thoughts on “To hear voices, listen”