“In many ways, women are death’s natural companions. Every time a woman gives birth, she is creating not only a life, but also a death. Samuel Beckett wrote that women ‘give birth astride of a grave.’ Mother Nature is indeed a real mother, creating and destroying in a constant loop.
– Caitlin Doughty

My baby was inside the tiniest white casket I had ever seen.

Beautiful flowers were around the little box and some baby pink roses were on top, chosen by our mothers from Jeff, Morgan, and me.

After the funeral remarks by Jeff’s Uncle Ellis and a prayer by my brother Lane, we stood around for awhile, hugged, cried. Jeff’s granny worried I wasn’t wearing a coat on this windy November day. I didn’t notice.

I couldn’t leave. Not yet. I didn’t want to drive away and return later with Kali’s grave looking different than I had left it.

I needed to see the cemetery workers lower the box with Kali’s tiny body into the ground.

So we lingered a few more minutes. I watched the first shovels of dirt cover up our baby.

My greatest fear had come true. We had officially buried our sweet baby girl.

Does death still have a sting? It did that day. And many days (weeks, months, years) afterward.

But even though I believe in life after death through faith in Jesus, physical death still has to be dealt with here.

That’s what I loved about Caitlin Doughty’s book, Smoke Gets in Your Eyes: & Other Lessons from the Crematory. She invites us to meaningfully face death head-on instead of hiding it in the corners, defaulting to a death-phobic culture. 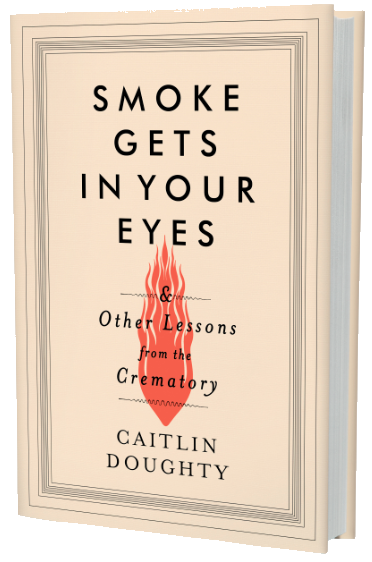 So in her book, she artfully mixes in her personal journey with death as a mortician and the historical journey of death from our and other cultures.

She points out that until relatively recently (as late as the beginning of the 20th century), more than 85% of Americans died at home. But around the 1930s we began to “medicalize” death. Instead of family members and religious leaders being with the dying person, we shifted to doctors and nurses getting those final moments.

And we (attempted to) push death further and further away from our awareness. At what cost?

Caitlin shares a story (one of many in the book) about an adult woman and her dead mother.

“Because of superstition, unquestioned even among those who should know better, this woman wasn’t given the opportunity to sit with her mother until, as a friend of mine put it, her grieving ‘felt . . . done, somehow.’ She missed her chance for closure. A corpse doesn’t need you to remember it. In fact, it doesn’t need anything anymore—it’s more than happy to lie there and rot away. It is you who needs the corpse. Looking at the body you understand the person is gone, no longer an active player in the game of life. Looking at the body you see yourself, and you know that you, too, will die. The visual is a call to self-awareness. It is the beginning of wisdom.”

When my dad grew sick with lung cancer, he told us he wanted his body donated to UAB for medical research.

But first he wanted to be at home when he died. So with the help of hospice, my siblings and I (and our Alzheimer’s-labored mother) were able to let him go the way he wanted.

It wasn’t easy. But it was satisfying knowing that it was how he wanted it.

After his final breath in his bedroom, we each could spend time with him. I didn’t want much. Once his soul flew out, I didn’t feel as connected with his body.

But one of my sisters, Sandy, did want more time with the body for closure. She was able to sit by his bed with him in his room for as long as she wanted.

Only when we were ready did we call for his body to be taken out of our family home.

I think Caitlin might have approved of how that part went down.

She mentions this mid-fifteenth-century German woodcut in her book. 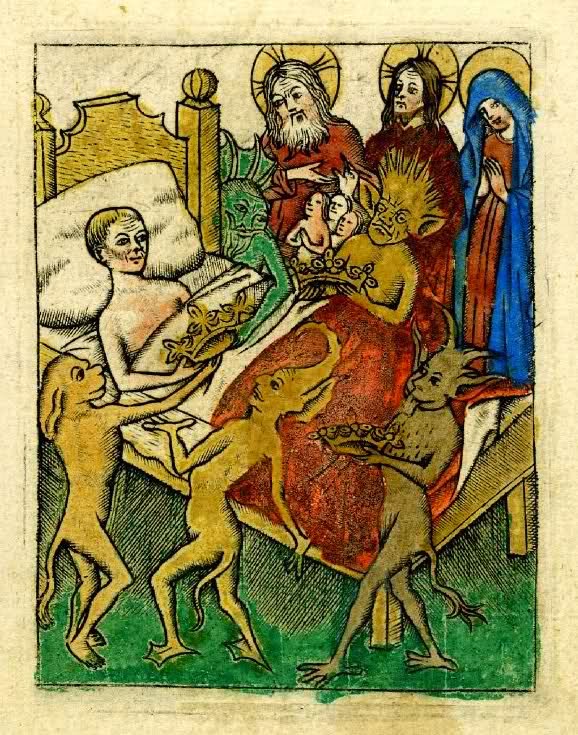 It a man on his deathbed, entitled Triumph over Temptation.

“The little smirk on his face tells the viewer what he is thinking: ‘Ah yes, death. I’ve got this.’
The question is: how do we get to be that guy? The one who is facing his own death with complete calm, ready to get on with the moving-on.”

Most of us won’t get much of a choice on how we’ll die. But by confronting our fears of death, we improve our lives now and perhaps make the death process a little less harrowing later for ourselves and for others.

Smoke Gets in Your Eyes isn’t meant to be a religious book, but if you’re like me and you read everything from a spiritual worldview anyway, you’ll find all kinds of religious meaning in it.

And also like me, you may come away from it rethinking some of your thoughts on death and your own mortality.

* If you don’t already know Andrew, I highly recommend you tune into the series he’s writing from his own experience with dying—“Your Dying Spouse“—on his blog, Blessed Are the Pure of Heart. It will move you as well as educate you.

* Another book on death and dying I strongly encourage everyone to read:
Being Mortal by Atul Gawande.

* Not for the faint of heart, here is Caitlin’s website, “The Order of the Good Death,” on staring down your death fears.

* Caitlin includes in the book these 7 reasons humans fear dying (from a 1961 paper in the Journal of Abnormal and Social Psychology). Which ones do you relate to?

29 thoughts on “How do you deal with death?”