“Every impulse is to fight, to die with chemo in our veins or a tube in our throats or fresh sutures in our flesh. The fact that we may be shortening or worsening the time we have left hardly seems to register. We imagine that we can wait until the doctors tell us that there is nothing more they can do. But rarely is there nothing more that doctors can do. They can give toxic drugs of unknown efficacy, operate to try to remove part of the tumor, put in a feeding tube if a person can’t eat: there’s always something.”
– Atul Gawande

I wouldn’t count my dad’s death from his short bout with lung cancer as typical by modern standards. He wasn’t in a hospital. He wasn’t accompanied by medical professionals. He never had chemotherapy.

It’s what he wanted. By the time he was diagnosed, the cancer was too progressed for treatment to be curative, so he decided to live out his remaining time without impediments of medicines that would weaken him more.

We tried to accommodate, even though it went against our grain at times to not give in to the medical establishment’s push to prolong life at any costs, and our own desire to keep Daddy here longer.

But after reading Atul Gawande’s phenomenal book Being Mortal, I’ve found even more peace that our decision to honor our father’s choices was the right one. 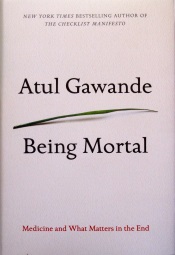 “Medical professionals concentrate on repair of health, not sustenance of the soul. Yet—and this is the painful paradox—we have decided that they should be the ones who largely define how we live in our waning days. For more than half a century now, we have treated the trials of sickness, aging, and mortality as medical concerns. It’s been an experiment in social engineering, putting our fates in the hands of people valued more for their technical prowess than for their understanding of human needs. That experiment has failed.”

If you have someone older in your life, or you ARE someone older, I can’t recommend this book highly enough. While it’s not a how-to book on aging well or an encyclopedia of options for health care, it is a thought-provoking walk through the aging process that we all will experience if we live long enough.

And one that we’ve probably already walked though with others, if not yet, then definitely to come. I wish I knew then with my parents what I know now.

It’s also about conversations we need to have with our doctors, our loved ones, ourselves. By our longing for the most optimistic reports, we encourage doctors to not give us full reports; the patient is always right and the patient doesn’t want to hear bad news. But,

“Our reluctance to honestly examine the experience of aging and dying has increased the harm we inflict on people and denied them the basic comforts they most need.”

In the book Gawande shares experiences of his research, of his own patients, and of his own father’s death. Some facts I expected; some surprised me.

“It turns out that inheritance has surprisingly little influence on longevity. James Vaupel, of the Max Planck Institute for Demographic Research, in Rostock, Germany, notes that only 3 percent of how long you’ll live, compared with the average, is explained by your parents’ longevity; by contrast, up to 90 percent of how tall you are is explained by your parents’ height.”

“The risk of a fatal car crash with a driver who’s eighty-five or older is more than three times higher than it is with a teenage driver. The very old are the highest-risk drivers on the road.”

But it’s not just the statistics and facts that are troubling. It’s also the lack of dignity and freedom that many elderly often feel in their final years.

“It is not death that the very old tell me they fear. It is what happens short of death—losing their hearing, their memory, their best friends, their way of life.”

It’s not all bad news, though. Gawande shares that as people age, they interact with fewer people, yet the interactions they do have are more meaningful. They’re more intentional about who they’re with and who they love. Their focus turns to being, not doing, and on the present, not the future or past.

“You would expect people to grow unhappier as they age. But Carstensen’s research found exactly the opposite. The results were unequivocal. Far from growing unhappier, people reported more positive emotions as they aged. They became less prone to anxiety, depression, and anger. They experienced trials, to be sure, and more moments of poignancy—that is, of positive and negative emotion mixed together. But overall, they found living to be a more emotionally satisfying and stable experience as time passed, even as old age narrowed the lives they led.”

One of the biggest take-aways for me was the paradox between autonomy and safety. In our efforts to keep our elderly “safe,” we strip them of their independence. Maybe it’s better to live with more risk if it means more freedom and happiness? It’s something I’ll think more about.

“Making lives meaningful in old age is new. It therefore requires more imagination and invention than making them merely safe does. . . .
Whatever the limits and travails we face, we want to retain the autonomy—the freedom—to be the authors of our lives. This is the very marrow of being human.”

The book does offer suggestions on ways we can do aging and death better. Much of it requires listening more, accepting mortality as normal, and abandoning our need to always try to fix it.

None of us will defeat death in the physical realm. That’s a given. But we can respect the transition as much as possible in a way that is life-enriching and dignifying. With hope. With courage. With love.

Although this book isn’t “Christian” per se, the issues it addresses are very spiritual, and my faith in eternal life through Jesus makes these issues even more relevant.

“No one ever really has control. Physics and biology and accident ultimately have their way in our lives. But the point is that we are not helpless either. Courage is the strength to recognize both realities. We have room to act, to shape our stories, though as time goes on it is within narrower and narrower confines. ”

As Gawande points out, the two unfixables are aging and dying. We can’t eliminate either. We can only manage them within narrow limits.

My dad decided how he wanted to manage them before they managed him. It’s how he chose to die. I don’t consider it a bad way to go, although I wasn’t ready for him to leave and I did see him experience more pain than I wanted to.

How do I want to die? Probably like you—with as little pain as possible and after many satisfying years with family and friends.

But also like you, it probably won’t be entirely up to me.

Ultimately, God is the only one who gets the final word about the end of our lives here. And for that, I am grateful. 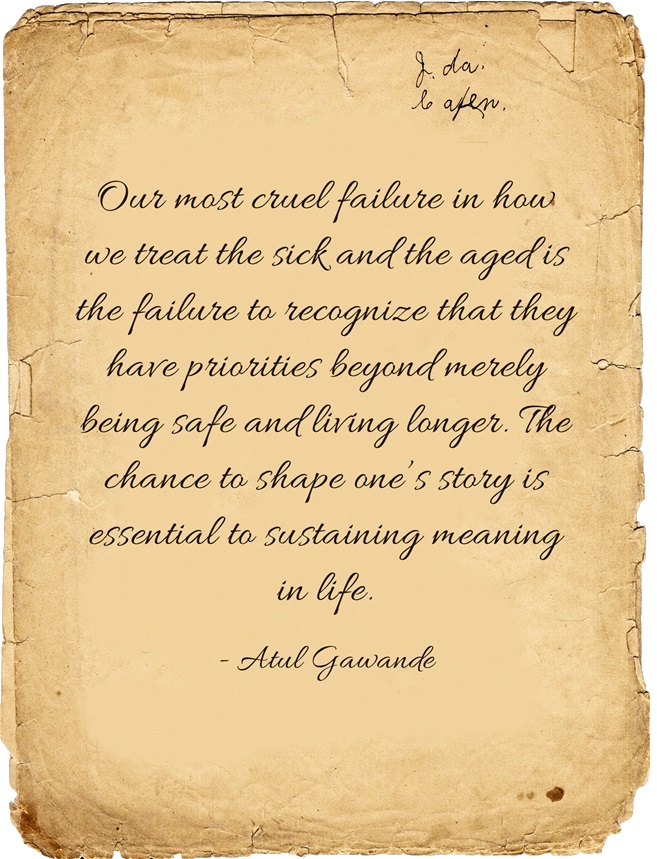 Along with Just Mercy, Being Mortal is one of most influential books I’ve read in awhile (and I go through a lot of books).

Unfortunately I was unaware of “Being Mortal” when it PBS aired about it on Frontline earlier this year. Here’s a clip.

[Watch here if you can’t see the video below]