We can never make a difference if we don’t first notice.

“We are probably deluged with more images of pain than any previous generation; they are beamed into our homes nightly on the evening news.

It is easy to get compassion fatigue and tempting to dismiss these spectacles from our minds, telling ourselves that there is nothing we personally can do and that this misery has nothing to do with us.”
– Karen Armstrong, Twelve Steps to a Compassionate Life

Over chips and salsa at Buena Vista, my sister Sandy and I would listen as Kelly updated us on her friend Diana. We’d listen to the decline in her health, the hopelessness of a cure, the hospital visits and cancer treatments and sad conversations.

And we’d all commit to pray. For Diana. For Kelly.

Until one day, I found out Sandy had now met Diana herself.

And after another lunch, Sandy and Kelly suggested I should, too.

It’s one thing to pray from afar for a stranger dying of cancer.
But it’s another to walk into their living room.

On my first visit, Sandy and Diana were sitting outside on Diana’s porch when I arrived. Diana was alert, talked some, let us pray with her. I was blessed to finally meet her in person, to put a face to the name. And also blessed to meet her caregiver, Mary, a godly woman who was loving Diana hard in body and soul.

On the second visit, things were different. Vastly.

Diana was in bed, in pain, and non-communicative except for groans. I watched as Sandy stroked Diana’s hair, as Mary lifted her for yet another bathroom visit. I prayed silently and aloud for healing, for peace, for something good to show up in this room. And he did. The Lord was present.

But it was hard for me to be present.

Looking suffering eye to eye is overwhelming; hearing pain wail louder and harder is suffocating. After an hour and a half, I’d had enough. With a guilty conscience, I hugged everyone goodbye.

The third visit, things had changed again. Diana was now on heavier medication, and was sleeping soundly. I visited with Mary, Sandy, Kelly, and family who had flown in from Texas.

It was easier to sit with the pain when the pain was quieter.

The fourth and final visit, just a few days later, was seeing Diana in her casket. Her face showed no signs of struggle, her body no longer troubled, her spirit now freed.

In the temporal timeline, my visits to Diana were a tiny blip, hardly recognizable. Three home visits and one funeral home.

But in the eternal timeline, she’s no longer just a name I prayed for. She’s a face impressed in my memory, a soul in my heart, and a living lesson on my jagged journey to learn compassion.

While the noisy suffering in the world makes me want to look away—scares about Ebola, terror from ISIS, wars and poverty and disasters—I need more courage to look at it anyway. Notice it. Recognize it. And respond to it as I’m able.

Even if just one at a time.

Especially one at a time.

Look at one face.
Grasp one hand.
Hold one conversation.

Diana was one. One made a difference in me. 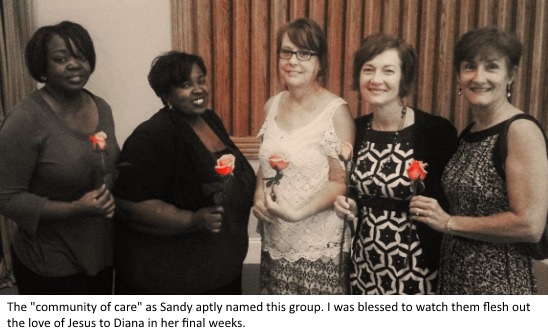 Have you seen the NFL’s PSA for “NO MORE” looking away from domestic violence? It’s beautiful.

What one person in your path is suffering this week? How can you recognize their pain? Please share in the comments.

For Step 11 in my Year of Compassion, November’s challenge is RECOGNITION. This month I look forward to meeting James Owens, Auburn University’s first African-American football player (1969), and hearing his story.