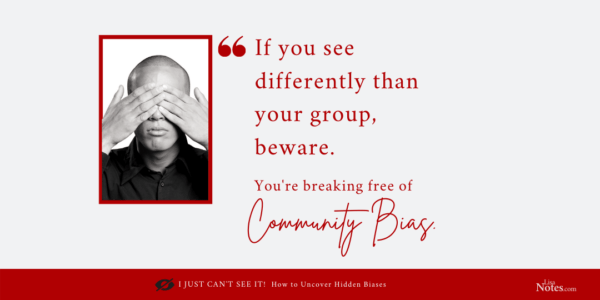 What is community bias?

Community bias is our tendency to only see what our group wants us to see.

As Brian McLaren explains it, “It’s almost impossible to see what our community doesn’t see.”

McLaren further explains that when we’re in sync with our group, our ideas flow freely. At least within the boundaries of how our group already thinks.

But if we start to think differently from our group? Our minds slow down and it becomes harder to think clearly. At least initially.

What’s an example of community bias?

If you know a teenager or remember your own teenage years, you know how easy it is for a teen to think like her group thinks.

If the group thinks it’s cool to wear bell-bottomed jeans, that’s what she wants to wear, too. She doesn’t even think about it. She trusts her group and accepts it as true. Case closed.

Why does it happen?

We look to our group to learn how to behave. We need to see how others navigate life so we can too. It’s natural and necessary to belong to a group. We like to fit in. God made us to function best in community. It keeps us safe and gives us purpose.

A group gives us shared values and experiences and beliefs that we can adopt without effort, without having to think about it.

We may have many groups: our church group, our work friends, our political allies, our hobby clubs, our families, even our sports affiliations.

Each group likely has its own core set of unspoken beliefs that keep it tied together. That’s not necessarily bad.

But it becomes bad when no longer think for ourselves or when we’re too afraid to ask questions or disagree for fear of disbarment from the group.

Is community bias a bad thing?

Ultimately, yes. The inability to think for ourselves can lead us down dangerous paths, both literally (agreeing to drunk driving because that’s what the group is doing) and figuratively (becoming an engineer because that’s what everyone in the family does, even when it’s not your thing).

Community bias robs people of their individual uniqueness that God created them with.

It’s also dangerous for others outside our community bias. When we think everyone should think like we do (because we’re right, after all!), then everyone else is wrong. When someone disagrees, we alienate them, rob them of opportunities, and destroy relationships.

If you’ve ever questioned whether to leave a church home, and talked to someone within the church about it, you may have quickly brushed up against community bias. Other people still on the inside may not be able to see what you’re seeing at all.

Today’s political climate is another case in point. In-groups can quickly turn against their own members if they voice any disagreements, even erupting into bullying and violence.

How can we steer clear of community bias?

As with the other biases, it’s hard to watch out for something we don’t know about. So be aware that community bias exists.

It’s difficult when one’s views become out of sync with their community, but it’s even more difficult if they’re not allowed to talk about it.

As my dad used to say, think for yourself. Don’t believe something just because someone else says it’s true. The Jewish people in Acts 17:11 were said to be “more noble-minded” because they wouldn’t immediately take even the apostle Paul at his word. They examined the scriptures to see if Paul was teaching them the truth.

Ask questions. Seek truth. Be honest. Stay curious. Talk to others. Be compassionate. Differ with grace.

How did Jesus handle community bias?

Jesus definitely had to deal with community bias from some of the Jewish people in his day. Jesus was a major disrupter to their current group-think of how religion was meant to be. He came to finish off an old way of life and transform them into a new way of life. They didn’t appreciate that.

Jesus faced major opposition because he didn’t see like the group wanted him to see. He saw differently. The gatekeepers challenged him to the point of death.

What did he do about it? He kept teaching, kept loving, kept welcoming in the outsiders anyway.

Jesus forewarned his new followers that they would be rejected, too, for thinking differently than the group. Don’t be surprised by it. Keep modeling love anyway.

He commissioned new believers to:

“go back to their communities of unchallenged bias to be gentle disruptors, using images like ‘sheep among wolves,’ ‘light of the world,’ ‘salt of the earth,’ ‘yeast in bread,’ or ‘wise as serpents, innocent as doves’ to help them understand both the danger and beauty of their transformative work.”
– Brian McLaren, Why Don’t They Get It

Can we do that, too?

Be on the lookout for those who have been kicked out of their group, who need loving acceptance, who need to belong without having to conform.

Even if that someone is you.

Have you been on either the inside or the outside of community bias? Please share in the comments.

You are on Day 10 of the series: “How to Uncover Hidden Biases.”