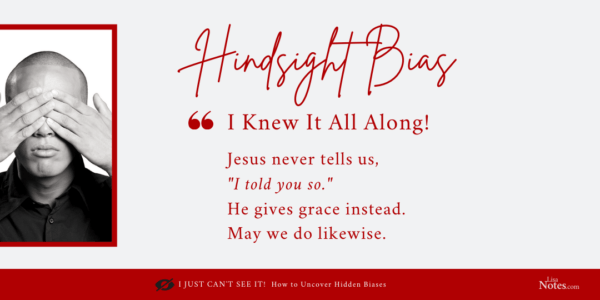 What is hindsight bias?

Hindsight bias is when we look back and say, “I knew this was going to happen!” even though we didn’t know. It’s sometimes even labeled the “I-knew-it-all-along” effect.

It’s thinking that past events are more predictable than they really are.

In Thinking, Fast and Slow, Daniel Kahneman explains it like this:

Here’s an example of hindsight bias.

Say your friend and their spouse break up. You think: looking back, I saw this coming.

Or Monday morning after the Super Bowl, you say you had a feeling that Kansas City was going to lose (even though you didn’t have that feeling prior to the game).

Or this: a jury hears the case of a low-risk surgery that ended in an unpredictable death. Because they know how the story ends (the patient dies), their hindsight bias says the doctor should have known better and done things differently.

Especially when the outcome is negative, we’re more likely to have hindsight bias. Per Kahneman, the pattern is this: the worse the consequence, the greater the hindsight bias.

Why does hindsight bias happen?

Why do we think things are more predictable than they really are?

One reason is because we want life to make sense. We want the world to be predictable. It’s comforting. Our brains are always working to complete a story.

When the unexpected occurs, our minds immediately begin reframing our view of the world to make room for the surprise.

In the Super Bowl example, it’s not that you’re lying about your your intuition. It’s that you’re misremembering your earlier prediction. After the win, your brain reconstructed your past state of mind, and inserted the fact that Tom Brady is an unstoppable quarterback for Tampa Bay, so of course Kansas City would lose.

Also, we generally pay more attention to negative outcomes than positive outcomes, so our hindsight bias distorts our memories even more after a loss than a win.

As with any of the biases, hindsight bias is dangerous because it keeps us from seeing clearly. It prevents us from making correct evaluations.

Hindsight bias can easily lead to overconfidence. If we think we have correctly predicted the past, we’re more apt to make unrealistic predictions about the future, such as in the stock market or in an unhealthy relationship.

Hindsight bias also can hinder us from taking responsibility for and learning from our mistakes. It oversimplifies the past. It causes us to look for a single explanation about an event, instead of examining the many factors of our own behavior that could have caused the outcome.

How can we counter hindsight bias?

We can counter it by considering what could have happened, but didn’t. Give yourself a more balanced view of potential outcomes. Remind yourself the past (and present and future) is complex.

We also can remind ourselves we really can’t predict the future. We can look at data and facts to help make future decisions, but we can’t know for sure what will happen.

Another solutions is to record our thoughts *before* an event. Then look back *after* the event to see if we’re misremembering our earlier predictions. Our selective memories tend to err on the positive side.

How did Jesus handle hindsight bias?

Jesus didn’t have hindsight bias himself; he always saw clearly. But as his followers, we definitely have it.

When we look back at how the Hebrew people complained in their wilderness wanderings, we know *we* wouldn’t have complained so much. When the Israelites rebelled again and again, we say we knew that was coming. Even when we read of Peter saying he would never deny Christ, we shake our heads and say we could have predicted he would.

Life is clearer looking back than looking ahead. We can look back at the mistakes others have made and say they were predictable, not realizing that we are just as susceptible to them ourselves.

Jesus could have looked at Peter after Peter’s denials and said, “I told you so.” But he didn’t. Instead he offered him bread and fish and forgiveness.

That’s how he handles our past mistakes as well. Instead of “I knew you were going to mess up,” he offers us grace for today and strength for tomorrow.

When’s the last time you said, “I knew it all along“? Share in the comments.

You are on Day 11 of the series: “How to Uncover Hidden Biases.”

Previous: Community Bias {Bias Day 10}
“When You See Differently Than Your Group”

Next: Bias and Religion {Bias Day 12}
“Is Questioning Your Religion Bad? Or Is It Healthy?”