When the Losses Pile Up

The losses. They pile up through the years. Like a mountain of garbage stacked higher and higher.

Granted, the graces have also been plentiful. The blessings numerous. The joys bountiful.

But yet the disappointments. The sufferings. They sit here still. They weaken, but they don’t disappear altogether.

When a new loss arises, the others gather round again, in a return appearance, to say, yes. We were once here, too.

The temptation is to cut new losses off at the pass. To be the one to let go first. To preempt the pain.

But perhaps there is a gentler way than total break-off.

The way of release. 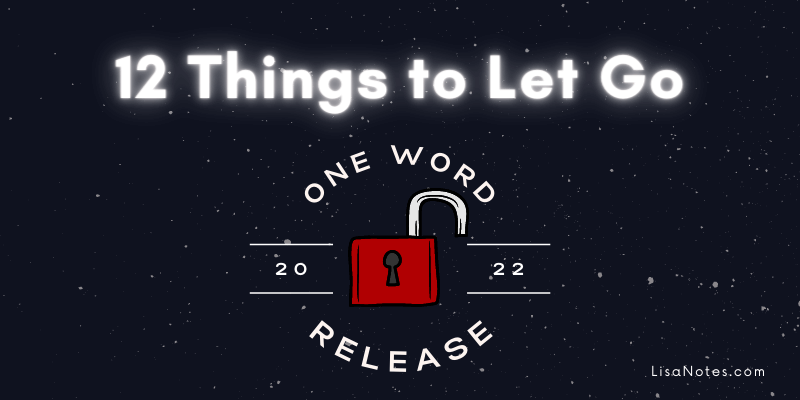 In release, we hold our hand open for the good to light on us in the moment, but we don’t squeeze it closed.

We enjoy it while it’s here, but not grow bitter when it’s gone.

In ways, we practice release unconsciously all our lives. We can’t keep things the same, no matter how hard we try. Change happens every day, voluntarily or otherwise.

But this year I want to practice release more intentionally. My One Word for 2022 is RELEASE.

It follows a year of UNCERTAINTY (my 2021 Word). God showed me uncertainty in many areas last year—I disliked much of it—but this year God is leading me to RELEASE.

Here’s the list of 12 things I want to practice releasing this year. (Or at least loosen my grip on. I must also release perfection; I don’t expect complete success in any category.)

Each of these needs further explanation. But to practice January’s goal, I’ll not elaborate; I’ll release my compulsion to explain each choice.

Release as a Spiritual Discipline

RELEASE frightens me a bit, I confess. RELEASE feels dangerous. I don’t want to let go of too much. Or let go of something I’ll need later.

Yet it also feels liberating. It smells of freedom.

RELEASE will be my spiritual discipline of trusting God.

RELEASE signals I’m not here to accumulate, but to blow through. The Spirit breezes in. And when I’m aware enough, I breathe Spirit in deeply. Each inhale comes with an exhale, releasing the futility of trying to capture the wind.

I can’t trap it. I can only harness it when it comes. Appreciate it. Enjoy it. Maximize its energy in its day with me.

We plan for Jeff’s retirement this spring. We’re excited about it. But we can’t predict all the changes it will bring. We look ahead with delight, yet also hold all plans loosely.

Is there anything you need to release in 2022? What’s your One Word, if you’ve chosen one? Share in the comments.

If you want more companionship as you practice your One Word this year, sign up here for our One Word 2022 Community. You’ll receive a monthly email with more details and resources. You can unsubscribe any time. Our monthly linkup will be the 22nd of each month.