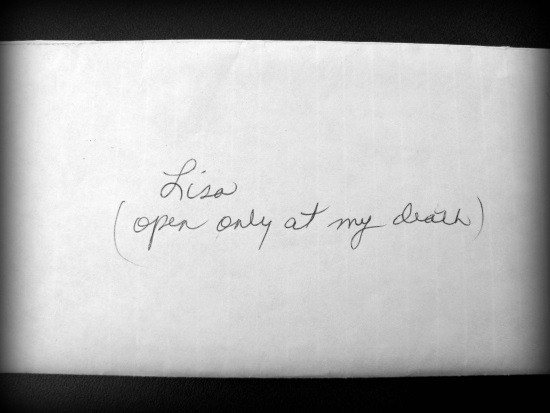 I can’t remember when I first stumbled upon this envelope. It was sometimes during Daddy’s short run with lung cancer. We were sifting through papers in his office, getting things in order, just in case he didn’t make it.

There were four envelopes, one for my brother, two sisters, and me. Each in Mama’s handwriting. We discussed what to do about them. Mama’s Alzheimer’s was pretty bad by then, but she still might notice if these disappeared. So we left them for awhile.

But after Daddy died and we saw Mama getting worse quickly, I pulled my envelope from the stack. And took it home. I was afraid it might get accidentally thrown away. I couldn’t live with that.

The next decision was whether to do what she said: wait until she died to read it. Part of me said, “Yes! You’re never too old to obey your mama.”

But another part of me knew that pieces of the woman who wrote these letters had already died. Maybe reading these letters now would help me better help her while she was still with us.

I opened the letters.

“Dear Lisa,
I just wanted to write a few lines for you to read at my death. It’s not anything great or magical but just something I want to say.”

She said she never wished that I was like anyone else, and that I’d “never caused us any heartache (at this writing anyway).”

I laughed at that.
Then cried.
And read on.

She wrote this one while babysitting my first-born one afternoon. I was at a tough spot in my life and she was feeling it, too.

“It’s been one of the most painful things for you to go through and I’ve hurt all along with you. Some things we never understand.”

“It has been so hard not knowing how to help and wishing I could take away your pain and sadness but knowing I couldn’t and that you had to go thru it yourself. That was hell on earth. I don’t think anybody knows the love a mother has.”

Through the years she wrote. The paper changed. The handwriting grew shakier. But the love remained the same.

“Just want you to know that I love you and still proud of you and so thankful for Jeff being such a loving husband and father. More than likely Keith and I will go before any of you children. We are happy and will be ready when He calls. I imagine I will be writing when I’m 80. 🙂
Mama”

I fold the letters back up, seal them in the envelope, and return them to their safe place.

But my mama, I still carry her and her words fresh in my heart.

She was wrong in saying I never caused her any heartache. I did. And she took my own heartaches as her own.

But she was right in saying the love of a mother is special. I’ll be forever grateful I had hers.

Have you written a letter to be read after you die? Received one?

20 thoughts on “Letters from Mama”