Even though I didn’t know him well (although I feel like I did), I’m torn up. Because everything I did know about him was good.

And because everyone I know that knew him are better people because of it. 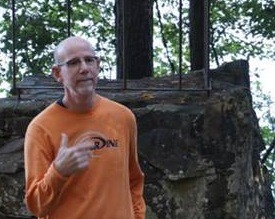 Jim Brinkerhoff would have denied he was anything special. But if you were ever around him at all, you’d have to disagree. He was special.

And he was real. After only a few times around him, I picked that up. I also discovered he liked order. He liked books. He liked people.

And he loved Jesus.

When my husband Jeff went to Auburn University in 1984, Jim was the campus minister at the Auburn Christian Student Center through Auburn Church of Christ. Jim’s determination to be authentic, to live like Jesus, and to care about people grew Jeff’s own faith in deeper ways.

Thank you, Jim, for your influence on my husband. It ripples out to me.

When our daughter Morgan was seeking colleges, Auburn wasn’t her top choice. We insisted on just one visit before she ruled it out.

She was grumpy on the drive down. Walking around campus, talking with professors, and seeing the city of Auburn helped, but our final stop changed everything: she met Jim.

He didn’t try to sell her on Auburn. He was just himself—enthusiastic about the amazing things God was doing there. It was enough. Back in the car, Morgan was now happy and certain: this was where she belonged.

And being in Auburn changed her life. She made new friends, learned life lessons, and gave us a wonderful son-in-law.

Thank you, Jim, for your influence on my first-born. It ripples out to me.

Last year was Jenna’s turn to leave home. Knowing the stories of Jim, she began her freshman year hanging out at the Auburn Christian Student Center with Jim at the helm. Although she’s now involved with other ministries, she was blessed with initial friendships and the feeling of home from what Jim had started. And her faith is now more real than ever.

Thank you, Jim, for your influence on my baby. It ripples out to me.

So even though I was never a student in Jim’s campus ministry, his influence reached me anyway. Because he touched my family, he touched me.

Did you know Jim?
If you know someone who knew Jim, you know him a little, too.

Because it’s not always who you know directly. Or how many people you know. It’s how you love those you do know.

And how that ripples out into the lives of those they know. Maybe some pebbles make a bigger splash when they’re thrown into the deep, but all of us make ripples.

Be love. Show grace. Live Jesus.
Jim did.
It will be his legacy. 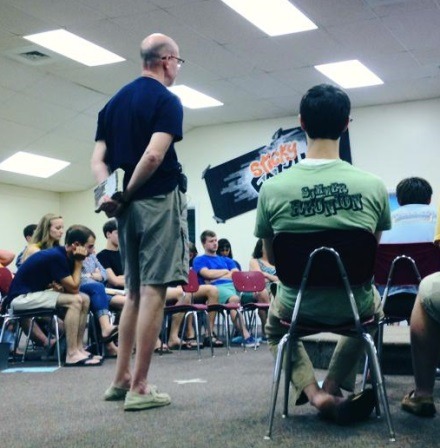 Jim Brinkerhoff died unexpectedly Thursday, December 5, of a heart attack at the age of 56. He leaves behind his incredible wife Mary (who will meet you once, then forever remember your name!) and three beautiful children.

And he also leaves a legacy of thousands of lives changed by Jesus because of his own connection with Jesus and his more than 30 years devoted to students and families in Auburn, Alabama, and beyond.

We cannot but speak of what we have seen and heard.
Acts 4:20

38 thoughts on “Ripple out – In memory of Jim Brinkerhoff”