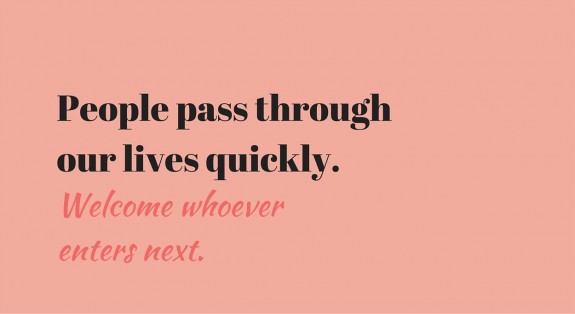 We knock once. Wait. Knock again.

If you don’t answer the second time, depending on whether you’re typically at home or not when we come by on Wednesday afternoons, we’ll probably leave your supper by your door, with a neighbor, or else mark an X on our list.

Mr. M is always at home. He always answers his door. On the first knock.

But two Wednesdays ago, it took two knocks. And when he did come to the door, he was disheveled. Not his typical neat self with clean dress pants and belt and shirt tucked in. Kay and I both noticed it was a little odd, but didn’t think too much about it. He was still friendly. Always thankful.

Then one Wednesday ago, he didn’t answer the door at all. We even knocked a third time. Still nothing. We set the Styrofoam-packed dinner near his door in a chair and moved on.

Then on Friday a few days later, I read a name just like Mr. M’s in the obituaries.

But I suspect it’s probably not.

I’ll find out tonight when we return to his apartment building.

I’m not sure I want to know.

The hardest thing about working with older people and/or sick people is that you lose them more frequently. (How do you in health care handle such frequent losses?)

A month earlier, Kay and I noticed Mrs. W’s name was no longer on our list to receive a meal delivery. Did she move? Taking a trip? We always had spent longer than allocated in a hearty conversation or prayer with her.

But when we asked around, we were shocked. She’d died. Suddenly. Her niece said her aunt hadn’t been feeling well and wanted to take a nap. When she later went to check on her, she had already passed.

Who won’t answer the door this afternoon? Whose name will be off the list? It’s only a matter of time for all of us. We know this. But we still don’t like it. And I haven’t gotten used to it.

People pass through our lives quickly.

So in a few hours, I’ll discover if Mr. M has indeed crossed the chasm or not. I’m hoping he’ll answer our knock.

But if he doesn’t, I’ll look forward to seeing him later on the other side. Where he’ll be whole. Fully visioned. And won’t need our help.

To whomever opens the door next in his old apartment? Welcome. For however long or short our time together may be.

Has anyone slipped quickly out of your life lately? Please share in the comments.

25 thoughts on “Who will open the door?”