Contact bias is when we can’t relate to another because we’ve had no sustained personal contact with them. Whether due to lack of opportunity or lack of willingness, no interactions exist.

Our prejudices are then free to flourish without hindrance. If we’ve developed false assumptions, they go unchallenged.

The new stranger in town is often given the side eye.

Here’s a personal example. I grew up in a small town in the south where most of my neighbors and schoolmates were Protestant Christians. We developed stereotypes against Catholics because we didn’t know any. When a family of Catholics moved into the neighborhood with girls my age, I was initially afraid to go into their house. I expected everything to be different and scary. (Update: it wasn’t. They were a normal family. We became fast friends.)

Another example involves wealth hierarchies. Shane Claiborne often says, “It’s not that the rich hate the poor, it’s that the rich don’t even know the poor.” Because some people who are rich don’t have friends who are poor, they can’t see the world through the eyes of a person who is poor.

Politics is another example. Many Republicans (or Democrats) have friend groups with only other Republicans (or Democrats). Because they have no friends in the other party, they distrust them and stereotype them as “mean” or “immoral.” (Which in turn becomes a self-fulfilling prophesy and prevents friendships from developing because who wants to befriend someone who labels you “mean” or “immoral”?)

Sometimes it’s handed down from generation to generation. Because the United States has centuries of practicing prejudice against Black people, many white people grow up in families who still look down on Black people as lesser. They refuse to open the door to friendships with Blacks, so they don’t outgrow their prejudices.

Other times it’s more subtle. Systemic racism, for example, is built near-invisibly into many systems, preventing cross-over relationships. Maybe your white church is open to all people, but you only do church there in traditional white ways, making people of color or other nationalities feel uncomfortable if they visit. Your church remains predominantly white as a result, reducing opportunities for contact with others. And if you don’t in turn step out to visit Black churches, everyone remains in their perspective corners.

It’s normal to want to avoid uncertainty. It’s easier to stay with people we’re already familiar with than to venture out into new territory. We’re not good at being inclusive because it makes us uncomfortable. 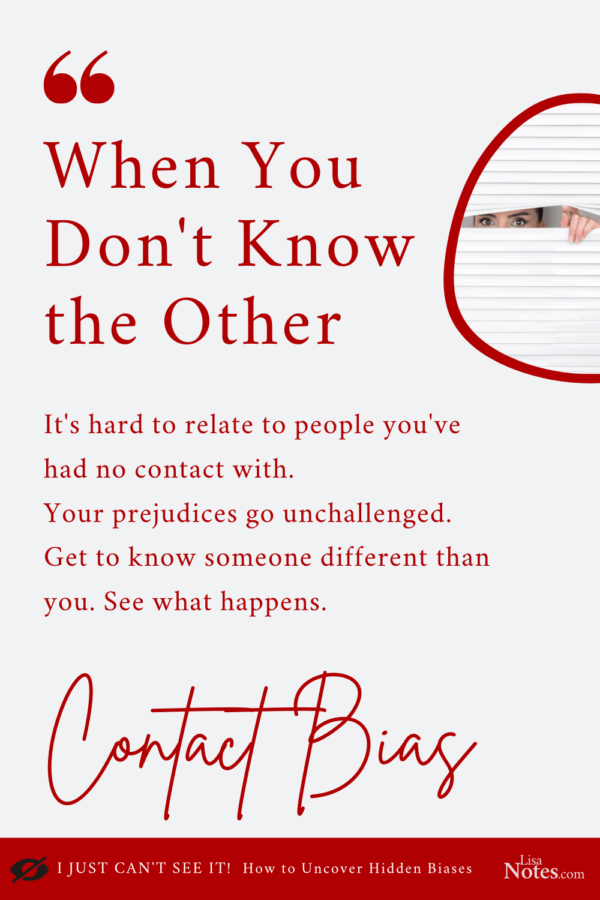 When we treat others who are different from us with less dignity than people who are similar to us, it’s bad. It leads to hostility and bigotry, and eventually to aggression and potential violence, even death.

Those who try to break into a group can be rejected and thrown out, simply because they’re unknown.

Avoiding those we don’t know not only causes pain to the stranger, it also stunts our own growth. When we refuse to increase our exposure to those who are different than us, we miss out on new experiences and opportunities, as well as reinforce our own narrow-mindedness.

It can lead to bad personal decisions as well as catastrophic societal behaviors, such as discrimination, xenophobia, hate crimes, genocide, etc.

It may not be easy to do, but it’s easy to prescribe: Broaden your contacts.

Be open to meeting people who are different than you, without judgments and preconceptions. Whether the difference is in race, gender, religion, age, politics, or economics, make the leap to expand your contacts.

For Christian believers, have friendships with non-believers to get to know them as individuals, not as projects to be converted. See them as people who love their families and live by moral principles and want to live meaningful lives, just like you do.

If you’ve visited a foreign country, you often come back home with an affection in your heart for friends you made there, people you may have once assumed were very different from you.

Usually what changes our minds about a particular group of people is getting to know an individual in that group. It challenges our stereotypes and changes our hearts. It also helps us see that every individual is unique, regardless of what group we categorize them in.

And what if we still don’t like the specific individual? That happens. But at least we’ve broadened our perspective and gotten to know one more person.

How did Jesus set the example to avoid contact bias?

Jesus was radical in his ability to cross the cultural lines of his day.

Jesus respected women, he touched lepers, he ate with tax collectors, he valued children. He paved the way for all people to enter the kingdom of God, not just the Jewish people.

He confronted prejudice and challenged his followers to do likewise.

That includes us. One way to do so is to fight against our contact bias and get to know and respect others more.

When have you been surprised once you got to know someone different? Please share in the comments.

You are on Day 18 of the series: “How to Uncover Hidden Biases.”

Next: Bias and Race {Bias Day 19}
“Are You Aware of Your Racial Bias?”