What is the framing effect?

The framing effect is when our decisions vary because of the way information is presented to us (the frame), rather than the face value of the information itself (the painting).

Depending on the wording (framing), we draw different conclusions. We lean toward’s options that are framed positively (lives saved verses lives lost), and options that contain higher numbers versus lower numbers (95% fat-free versus 5% fat). 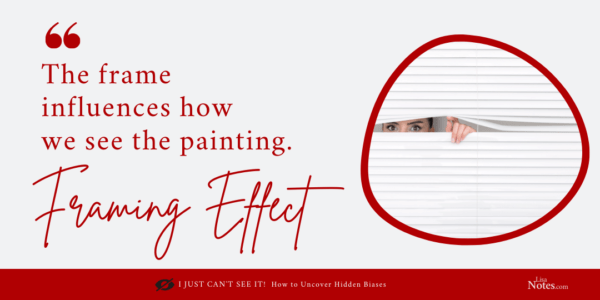 Here’s an example of the framing effect.

Remember Tom Sawyer tricking his friends to whitewash the fence? He was using the framing effect, convincing his friends it was a privilege to do the job.

Here’s a relevant example I saw. Say you’re presented with two identical containers of disinfectant wipes with their accompanying advertising.

You’re more likely to choose Type A than Type B because it is presented in a positive frame instead of a negative frame.

Another common example is a medical scenario. If you’re diagnosed with a terminal illness, which doctor will you choose?

Most people say they’d choose Doctor B, even though the odds are exactly the same with both doctors.

Why do we fall for the framing effect?

The framing effect is one of the largest biases we have when we make decisions. And it often increases with age, with the elderly more prone to make decisions based on presentation of the facts instead of on the facts themselves.

We’re biased toward gains instead of losses. Options framed in a positive light are more likely chosen.

“A loss is perceived as more significant, and therefore more worthy of avoiding, than an equivalent gain.”

Also, as with all biases, when given the option, our brain will take the shortcut. It opts for information that is most easily understood.

Research also says that framing leans on emotional responses. A charismatic political candidate can often get more votes despite having bad policies, than a boring candidate with better policies. We prefer the positive frame.

Why do we need to watch out for the framing effect?

We can be duped into overvaluing poor information simply because it is presented more clearly and is more understandable.

A great presentation can influence us more than the information itself because we see only what it wants us to see.

How can we guard against the framing effect?

Learn more about the issues and use critical thinking. Studies show that those more involved with an issue suffer less from framing effects around it, and make better informed decisions.

Get different perspectives. Ask others for their point of view. Encourage them to play devil’s advocate with you. Seek information from a variety of sources.

Look at the numbers. Even though statistics themselves can be framed in a variety of ways, look for the baseline numbers that answer the questions you’re asking.

How did Jesus see the framing effect?

Jesus presented the kingdom of heaven in upside down frame. The first will be last; to become a leader, be a servant; lose your life to find it; bless those who curse you.

Because he used a different perspective than they were expecting, his message was unsettling. They had to move past the packaging of a regular human being to hear the Son of God’s message.

But for those truly interested, his message caused them to really think. He actually encouraged them to do so, to thoroughly think it through. No man who puts his hand to the plow without counting the cost was fit for the kingdom.

And those who truly heard became true followers. He promised them escape from destruction and salvation eternally. It became an offer they couldn’t refuse.

May we truly listen for the truth as well. And accept the truth we hear, however it is framed.

How have ever made a purchase based on the framing effect? Please share in the comments.

You are on Day 17 of the series: “How to Uncover Hidden Biases.”

Next: Contact Bias {Bias Day 18}
“When You Don’t Know the Other”