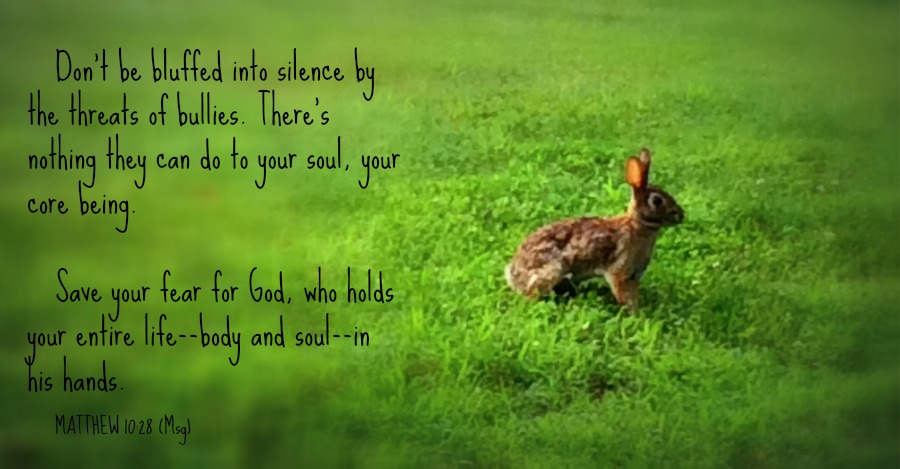 I opened the back door.

The rabbit froze immediately. Terrified, I could tell. I’ve had that look in my own eyes.

But what he didn’t know was this: There was no danger. Zero. I wasn’t going to hurt him.

And instead, none of those things happened. None of them were going to hurt me.

Not this time anyway. Bad things do happen. I know. I’ve had them happen to me. You, too. And we will again.

But most of the things we worry about don’t happen. It’s unlikely you’ve had Ebola, been targeted by a terrorist attack, or been bitten by a shark (or even a snake).

Are we scared of the wrong things?

Jesus said we shouldn’t be afraid of those who can only kill our body (Matthew 10:28).

The second half of the verse says only be afraid of the one who can destroy both body and soul in hell.

But we know that if we are God’s, we don’t have to be afraid of him either.

So what if instead of wasting our mental energy worrying about our safety, we took Jesus at his word, and refused to be intimidated by our bully brains?

What if we just said to each day: I welcome whatever comes today because God knows about it (Matthew 10:29). Even if it’s something scary and deadly, my hairs are numbered, I’m more valuable than sparrows, and God claims me as his own (Matthew 10:30-32).

I’m getting better at releasing my worry, by the grace of God. The more I stay in the now, the more I see his grace and uncover his peace, no matter what happens.

But I still have plenty of room to grow. I won’t give up now.

I watched the rabbit a little longer. As long as I was perfectly still, so was he.

But as soon as I moved, away he hopped, as fast as his legs could carry him. To perceived safety. From a perceived threat.

Or so he thought.

I don’t want to be a rabbit.

Are you a worrier? How do you overcome it? Please share in the comments.

36 thoughts on “Are we scared of the wrong things?”