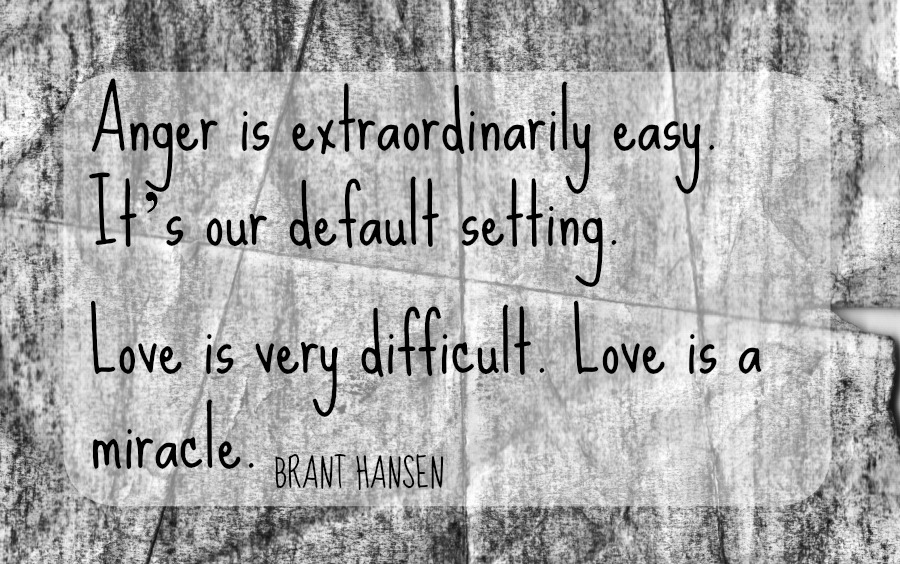 Do we have a right to be angry? Especially if it’s righteous anger, like anger against sin?

If you’re like me, you automatically assume, “Yes, of course we do.”

But I’m being challenged on that.

I’ve only read 30 pages so far in Brant Hansen’s new book Unoffendable. But I’ve already marked so much that I need to stop and share some with you.

See what you think. It starts on the dedication page:

“To all those who want grace for themselves
But struggle to extend it to others.

And it just gets harder. Here’s an excerpt from Chapter One, “Being Unoffendable: The Ridiculous Idea.”

“The thing that you think makes your anger ‘righteous’ is the very thing you are called to forgive. Grace isn’t for the deserving. Forgiving means surrendering your claim to resentment and letting go of anger.

“Anger will happen; we’re human. But we can’t keep it. Like the Reverend King, we can recognize injustice, grieve it, and act against it—but without rage, without malice, and without anger. We have enough motivation, I hope, to defend the defenseless and protect the vulnerable, without needing anger.

“Seek justice; love mercy. You don’t have to be angry to do that. People say we have to get angry to fight injustice, but I’ve noticed that the best police officers don’t do their jobs in anger. The best soldiers don’t function out of anger.

“Anger does not enhance judgment.

“Yes, God is quite capable of being both just and angry, but if I’m on trial in front of a human judge, I’m sure hoping his reasoning is anger-free.”

This book’s premise raises lots of questions for me:

I look forward to opening my mind and thinking afresh as I read through this book. I’ll let you know how it goes.

What are your thoughts on anger? I’d love to hear in the comments.

26 thoughts on “Are you justified in your anger?”