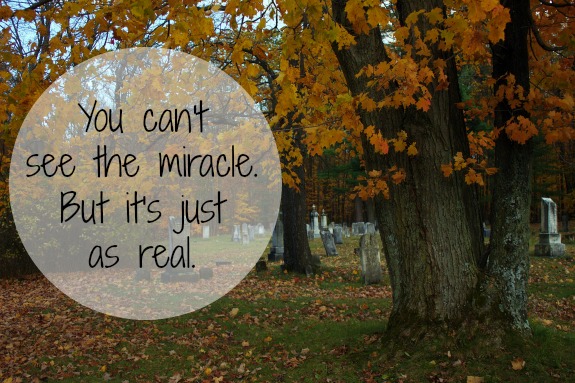 She was the precious wife for many years of my mother’s brother, Ralph. Because Jeff and I were too far away on a trip of our own through the weekend, I didn’t get to go to Aunt Shirley’s funeral. That bothered me. I wanted to see my cousins, my other aunts and uncles, my own siblings there.

And I didn’t get to see where she was buried. In that quiet little cemetery in small-town Mississippi.

Immediately after my baby Kali’s funeral years ago, I think those in charge wanted me to leave after Amen, to come back an hour later—after the burial—instead of standing there to watch it.

But I had to stay. I had to see the dirt, shovel by shovel, dumped over her tiny little casket. I needed it for closure.

Two days before the first Easter, Mary Magdalene and Mary the mother of Joseph needed to see the graveyard, too. They had to see where Jesus’ body would be kept.

Of course burial was different in those days. Jesus’s body was put into a cave-like tomb, sealed with a gigantic stone, then for double-dog-dare-you protection, guarded by Roman soldiers.

And Joseph bought a linen shroud, and taking him down, wrapped him in the linen shroud and laid him in a tomb that had been cut out of the rock. And he rolled a stone against the entrance of the tomb.

Mary Magdalene and Mary the mother of Joses saw where he was laid.
Mark 15:46-47

They needed to see because they knew they’d go back.

I knew I’d go back, too. I wanted to go back and check on Kali’s flowers, put out pinwheels, and just cry. They did, too (well, minus the pinwheels).

But our endings were different. At least for awhile. Because when Mary Magdalene and the other Mary went back, there was no body. At least not a dead one.

What they saw was a miracle.

What do I see when I go back?

It doesn’t look like much of a miracle. Grass has grown over the grave. The fresh flowers I used to keep there are now replaced by artificial ones to last longer. I occasionally take a pinwheel, but not regularly.

Because of the great miracle at Jesus’ tomb, miracles in our cemetery happen too.

I just can’t see them yet.

But I know they’re just as real. The souls with Jesus live on. And stay alive.

And one day my soul will meet again with all the souls that have transformed before my time. And those who come later. And we’ll all be as real to each other as when Mary and Mary met Jesus again in front of his empty tomb.

Because there’s more yet to come.

For my Aunt Shirley, my Kali, my parents, all your friends and relatives who have already passed on, the graveyard isn’t the end. It’s just the marker of transitions.

And from there, miracles continue to happen.

11 thoughts on “Another cemetery miracle”