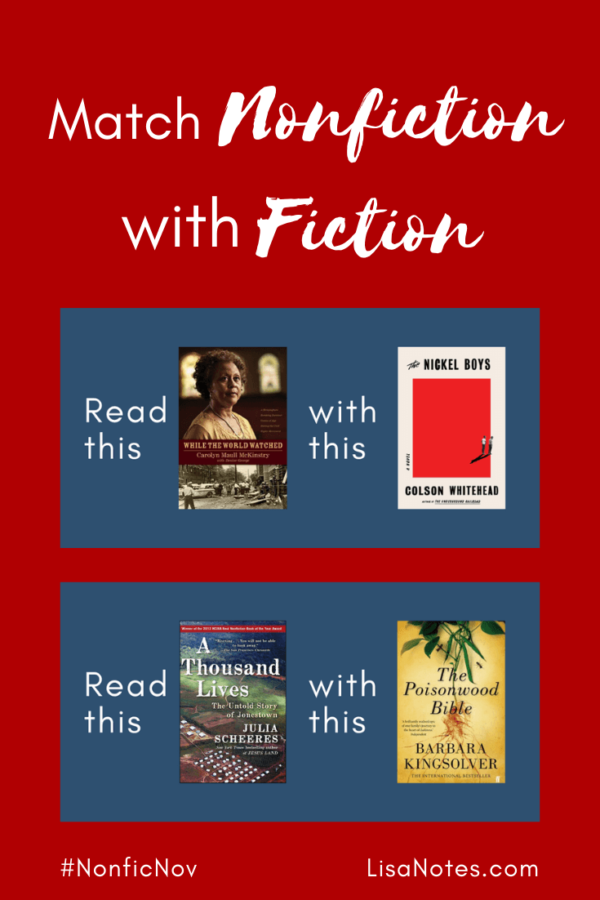 Do you ever read a novel and a nonfiction book and think, “These go great together!“?

For this week’s Nonfiction November assignment (hosted by Sarah this week), we pair a nonfiction book with a fiction book. I give you two pairs from books I’ve read this year so far.

My Favorite Nonfiction Books So Far This Year 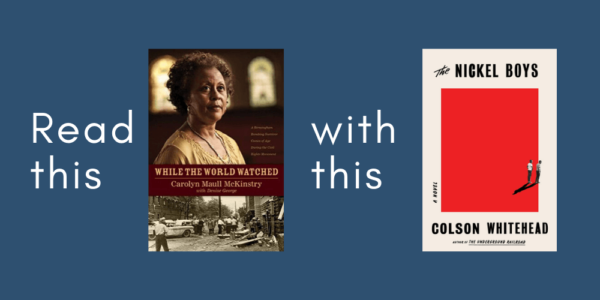 While the World Watched: A Birmingham Bombing Survivor Comes of Age During the Civil Rights Movement
by Carolyn Maull McKinstry
[my review here]

While the World Watched is a first-person, true account about the bombing of the 16th Street Baptist Church in Birmingham, AL, on September 15, 1963, by the Klan. The author Carolyn Maull McKinstry was a 14-year-girl at the time, a friend to all four girls who were killed by the explosion.

The Nickel Boys
by Colson Whitehead
[my review here]

The Nickel Boys is a novel about a reform school for boys in Florida in the Jim Crow South in the early 1960s. The staff is composed of prejudiced and sadistic men who take advantage of all the students, but even more so the black students. It’s based on a real-life reform school.

Both these books show us how badly that some white Americans treated black Americans as little as 50 years ago. And they remind us that even though we’ve come far, we still haven’t arrived at full equality and respect for all. We must keep working at it and showing love to everyone. 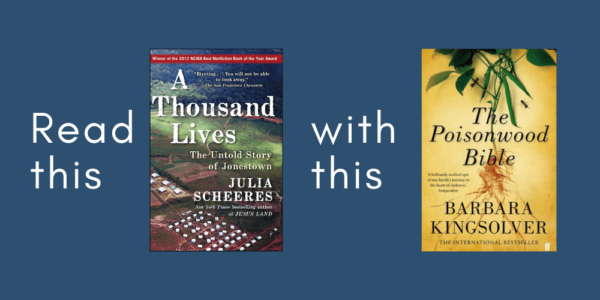 A Thousand Lives: The Untold Story of Hope, Deception, and Survival at Jonestown
by Julia Scheeres

This creepy but true story is how Jim Jones convinced hundreds of people in his People’s Temple Full Gospel Church to do his bidding, even to the point of moving to Guyana, living almost like slaves, and voluntarily committing suicide together on November 18, 1978. The book closely follows several parishioners, giving you a vivid picture of what they endured for Jim Jones, including some who dared to doubt as well as others who were blindly loyal at all costs.

The Poisonwood Bible by Barbara Kingsolver

This novel is about an evangelical Baptist pastor who moves his family to the Belgian Congo in 1959 to spread the gospel. As political circumstances and the family unravel, you see what it’s like to live with someone who is so firmly entrenched in his own distorted beliefs that it adversely affects others.

Both these books are based on a charismatic pastor who believe their personal version of the truth is THE truth, and insist on others following them in their beliefs. It shows how possible it is to be swayed to dark places that you couldn’t have imagined by putting too much trust in one person, but that it is possible to break free and begin thinking for yourself again.

Do you have a nonfiction and fiction pairing? Please share in the comments.