Do you ever think you are lazy? When there are certain tasks that I continually put off, I can accuse myself of laziness.

But maybe it’s just that those things don’t really matter to me?

In The Lazy Genius Way, Kendra Adachi shows us it’s okay to be “lazy” about the things that don’t matter.

And for the things that do matter? Find a way to be a genius.

I love the simplicity and organization of this book. Kendra gives us 13 Lazy Genius Principles (along with a healthy dose of humor). She explains each principle and gives examples, then ends each chapter with a recap, plus “One Small Step.” (She knows how we are.) 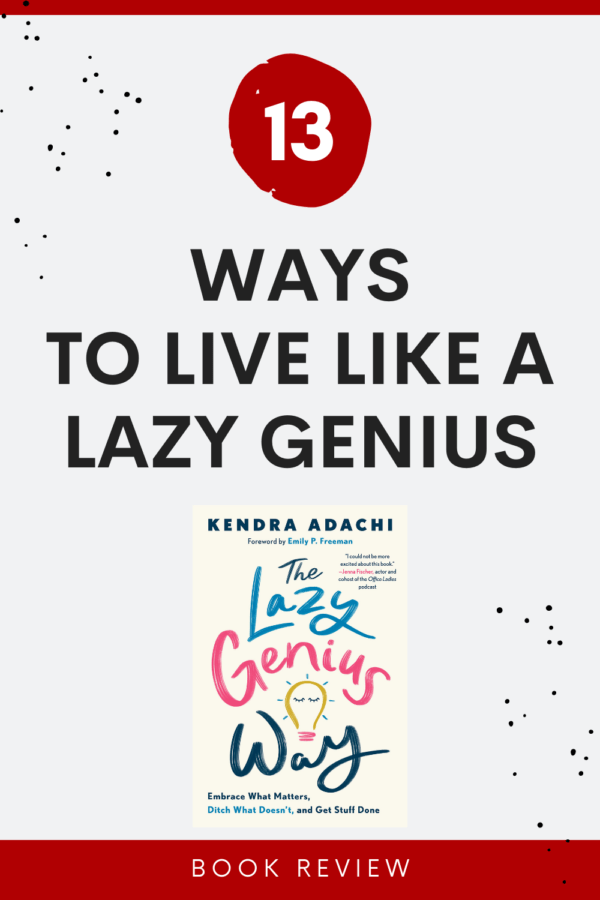 For example, the Lazy Genius Principle #3 is “Ask the magic question.”

“The Magic Question, put simply, is this: What can I do now to make life easier later?“

Kendra suggests we tend to the necessary before it becomes urgent. For her, the after-school schedule was chaotic. So to make life easier later, BEFORE she picks up her kids from school, she throws whatever food she has on a big plate and sets it on the kitchen table. When she arrives home later with her kids, there are no arguments about what to eat.

Another example is what to cook for supper. Even putting a pot of water on the stove in the early afternoon can make cooking spaghetti easier later in the day when you have a toddler on your hip and everyone is getting cranky.

Kendra uses the magic question for lots of areas.

The “One Small Step” for this principle is:

“What’s up next in your day? Ask yourself the Magic Question and see what happens.”

Here are all 13 of the principles.

I’ve read several books in this genre lately, but The Lazy Genius Way may be my favorite.

Let go of the “shoulds” and live your life how God designed you to live it.

Do you see yourself more as lazy or genius? Which of the 13 principles do you need the most? The least? Share your thoughts in the comments.

My thanks to Net Galley, WaterBrook &
Multnomah for the review copy of this book

9 thoughts on “Are You Lazy or Genius?
—Review of "The Lazy Genius Way"
”