“The most important surgery I would ever perform would be the stitching together of my faith, my doubt, and the things I thought I knew.”
– Dr. W. Lee Warren

There’s a type of brain cancer I wish I didn’t know about. Glioblastoma.

And even now, I only know about it because I read something in a book about it. Thankfully, that’s all I know.

But Dr. Lee Warren knows much more about glioblastoma, and I’m glad. He’s a brain surgeon who cuts it out. 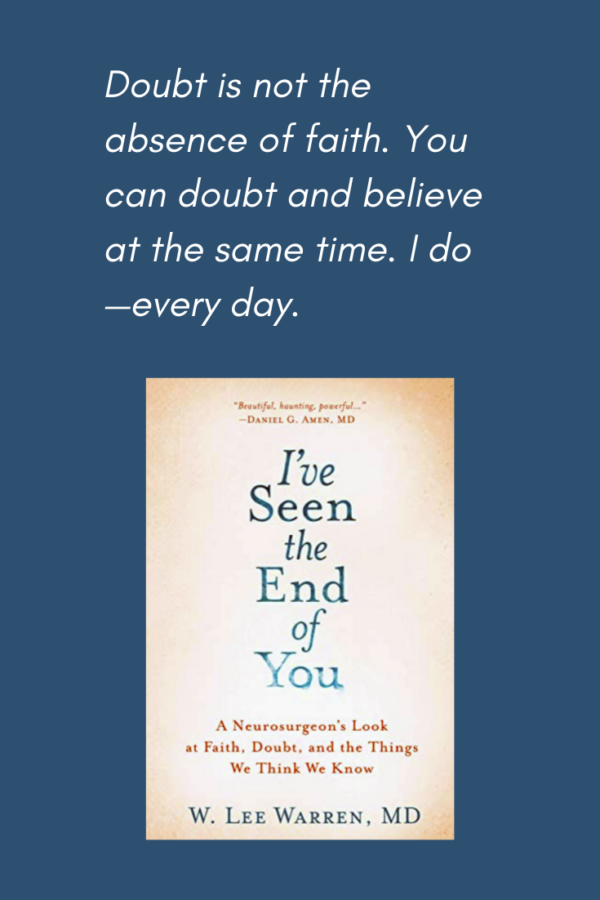 Is It the End of You?

The bad thing about glioblastoma for Dr. Warren is that it’s almost always fatal. So when he sees glioblastoma show up on your brain MRI, he has to be the one to tell you something. To be honest. Yet still give you hope.

And choosing which words to say is a heavy weight on him.

It bothers him so much that he wrote a book about how to deal with it. About how to “pray for God to heal someone of something no one ever survives.” It’s called I’ve Seen the End of You: A Neurosurgeon’s Look at Faith, Doubt, and the Things We Think We Know. And I highly recommend it.

If the intersection of doubts and faith weigh on you as well, Dr. Warren’s words may help you, too.

It’s a book of stories, but it contains a faith thread from beginning to end.

When we believe God is good, yet we see bad things happening, we can question our faith in who God really is.

But then a deep tragedy occurred in his own life. And all his doubts surfaced to a new level.

“Did I really believe, or did I believe I was supposed to believe?”

Instead of insisting on certainty in every aspect of his faith, he made peace with his doubts. He even came to see the necessity of doubts.

Thinking we’ve already arrived, that we already know it all, can be the end of us.

But doubting? Doubting can keep us pushing forward to learn more.

It can motivate us to keep searching for things we’ve gotten wrong, and “like a good scientist, reform our hypothesis and reframe our beliefs.”

“Doubt is not fatal if we recognize it for what it is: a smudge on the lens. When we realize that, wipe it clear, and put the glasses back on, we’ll be okay. The things we think we know are more like cataracts. They can obscure and blind us to the truth of God’s work around us that is plain to see when our eyes are healthy.”

While there are things we can know and rely on as foundational truths, there are other things we think we know but that aren’t reliable. Those are the things I’d rather doubt than *know* because they prevent me from seeing the real truths.

But how can we know the difference between the two? That’s our work to do.

I don’t want smudges on my glasses. When I notice them, I take my glasses off, wipe them clean, then put them back on. And see clearer once again.

I want to do the same with my doubts.

I hope no one I know personally gets a diagnosis of glioblastoma. Because I don’t want to see the end of them.

But as Dr. Warren says, there is always more to the story. Faith is stronger than doubt.

14 thoughts on “Which Is Better? Knowing or Doubting?
—Book Review of "I've Seen the End of You"
”