Life is a balance between holding on and letting go.
– Rumi

I wake up one morning and can’t find it anywhere. It’s missing.

My To Do email folder is gone. It’s disappeared, no longer in my sidebar of folders on my computer email.

This is bad. Very bad. My To Do email folder is my digital holding place. It’s where I transfer emails that need more time from me, things for later, not now.

Maybe you know the type of things:

I like having a To Do folder as much as I like having a To Do list. It’s a place to set things down. Get them out of my brain but still in a retrievable place. It’s like that flat surface in the kitchen where we set down unread mail or a pack of gum or a form that needs returning.

These items gather on our counters and in corners and closets. They are the “I don’t know yet” things. We’ll need them later. Or we think we might.

We mainly just don’t want to deal with them right now.

So we set them aside.

It clears our brain to know these items are safely preserved for later, but don’t have to be dealt with this moment.

But when the whole stack just disappears, like my To Do email folder? I can immediately envision all the things that I’ll forget I needed to do.

I google what to do when an email folder disappears. Maybe I’ve been hacked? I change my google password everywhere, just to be safe.

I check my phone email. I catch a quick glimpse of the folder (it’s there!??), but watch it then disappear before my eyes as the mail app updates to sync with my computer. No!

Then I start looking at other email folders, one by one. Will they start disappearing too? They don’t.

That’s when I notice something strange. In my Blog Stuff email folder, there is something suspicious. Another folder is embedded in this folder.

It’s my To Do folder!

I open it up. All my emails are still there. Whew! I must have moved the folder there by mistake the day before. I now move the folder back to its regular position in the stack.

But do I do anything with any of the To Do emails? Nope. Just a quick glance to assure myself they will still open.

Yet I was so concerned about losing them. Why, if I don’t care to use them?

That’s a question I’ve asked myself often during this year of Release for me. I hate to lose what I already have. It’s human. It’s actually even scientifically proven. Once we’ve been gifted even a free tote bag we’ll never use, we’re reluctant to let it go once it becomes “mine.”

So what about all the other things I’m not using (like most of the emails in my To Do folder)? If’ I’d never saved them (or “owned” them) in the first place, would I go out of my way to hunt down this information?

Most of the time, no.

Cutting the cord to things we’re attached to is never easy. But maybe life would be easier in the long run if we attach to less things in the short run.

Maybe that’s one huge lesson of RELEASE for me: Stop saving unneeded things in the first place. Don’t try to own things I won’t use or don’t need. End the pileups. Then I won’t have to let them go later.

Granted, the hard part is the first everyday decision with each email, each item, each opportunity.

But using clearer discernment in the beginning might reduce the losses in the end. Time is short. More presence now produces less burdens later.

That doesn’t mean we don’t hold on to important things; we need to do that. And when we’re not sure, it’s safer to keep something, to wait and see, instead of immediately tossing it. God will guide us.

I look at my freshly restored To Do emails now with fresh eyes.

Maybe I shouldn’t have even saved most of them in the first place. Do I really need an email telling me about the latest British TV series recommended by the Holstee newsletter (that I’ll never watch anyway)? No. I can delete that email now. And another email. And another.

I want to do myself a favor this week. At least when it comes to email, I’ll try not to save unnecessary ones. I’ll release them up front.

My future self will thank me later. 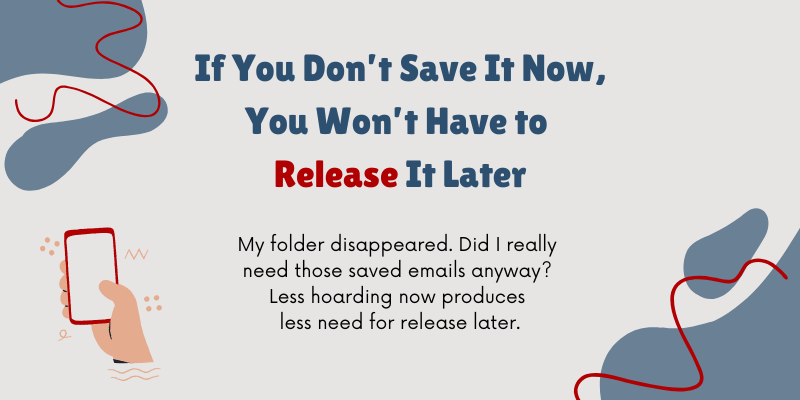 What have you had to release this year? Share in the comments.

14 thoughts on “If You Don’t Save It Now, You Won’t Have to Release It Later”