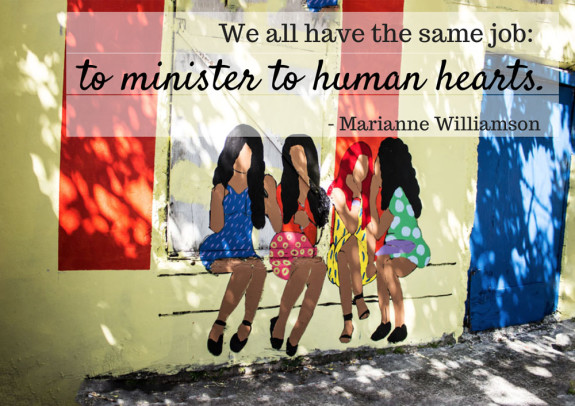 But in the real world that lies beyond all this, we all have the same job: to minister to human hearts. All of us are here as ministers of God.
– Marianne Williamson

We were lying in bed, catching up on the latest episode of American Idol on the DVR.

La’Porsha Renae, one of the two contestants from Mississippi, was telling her story before she sang her final song for the night.

As we watched, Jeff accidentally bumped the remaining spot on my stomach that’s still sensitive from my gall bladder surgery. I flinched. He immediately pulled his hand away and profusely apologized.

It was no big deal. I know he never wants his hands to be a cause of my pain. And they aren’t.

But that’s not true for everyone.

We continued listening to La’Porsha. When she was 18, she met a charming guy.

But he didn’t stay that way. He became abusive.

For awhile she took it, feeling she was no longer human, no longer a woman anymore. She felt dead. 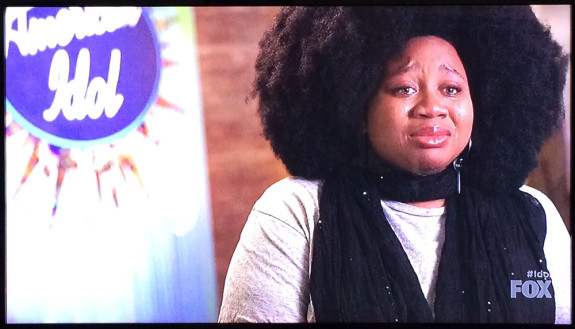 Until new life birthed through her. Becoming the mother of her baby girl, she found the courage to change her situation. She took her daughter and moved into a shelter.

And she started to remember again who she was.

Now she was saying, “I went to feeling below dirt to feeling like ten feet tall and I don’t want that feeling to ever go away.”

Not many weeks ago, a friend wanted to donate her old washing machine to someone in need. We discovered a local shelter for abused women could use it.

What had to be born in them to give them courage to change their situation and move into the shelter here?

We didn’t stay long. Jeff hooked up the washer, we told them we were finished, and they opened the gate to let us out.

It was such a small thing for us to drive into and then off the grounds.

But such a gigantic thing for the ladies who were living there.

Walking away from abuse takes a leap of faith, a hope that life can be better.

As we are healed ourselves, may we help heal others.

It’s our mission from God.

The entire world is blessed by the presence of healed people.
– Marianne Williamson

Watch La’Porsha perform “No More Drama” after her story was told on America Idol last week.

https://www.youtube.com/watch?v=6l-Lpth8OAU
[click here if you can’t see the video]

Whose story of healing have you heard recently? Who would you love to see healed? Please share in the comments.