What is normalcy bias?

We recognize normalcy bias better by its more common name, “the ostrich effect,” or burying your head in the sand.

Normalcy bias is our tendency to deny the possibility of a disaster. It’s our inclination to stick with our “normal” way of thinking, even when we’re faced with undeniable proof that something bad is about to happen. It’s thinking that things in the future will occur like they have in the past (i.e., normal). Tomorrow will be just like today.

It’s our way of avoiding an unpleasant reality.

What’s an example of normalcy bias?

Did you know that before the Roman city of Pompeii was destroyed by the eruption of Mount Vesuvius in 79 AD, 16,000 people in the city watched it erupt for hours instead of evacuating?

Normalcy bias is when we think: “It’s never happened to me before, so surely it won’t happen to me now.” 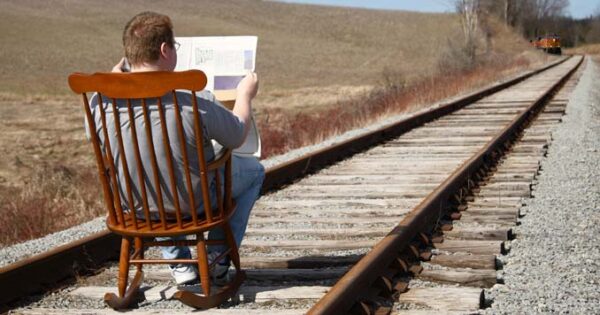 What makes us stick our heads in the sand?

Normalcy bias is not based on our logic.

It is a defense mechanism that takes over. Our brains tell us everything is normal. Don’t overreact. It’ll be okay. True disasters are rare. It prevents us from believing the seriousness of a situation.

The typical response pattern to a disaster is:

When we see our friends ignoring the disaster, too? That nails it; we can stay in denial. We’re social beings. If others aren’t responding to the danger, we don’t want to be the ones who overreact.

Studies show that 70% of people respond initially to a disaster with normalcy bias. Another 15% of people go the opposite direction and panic (blame them for the toilet paper shortage in 2020). The remaining 15% of people can think and act clearly (thank God for them).

How can normalcy bias hurt us?

By keeping us in denial, normalcy bias prevents us from making our best decisions. It discourages us from taking needed action, whether it be gathering supplies, creating an evacuation plan, or avoiding crowds.

Once the disaster hits, it’s often too late to prepare.

Deniers are often the ones who cause the most trouble for first responders if the disaster does occur. Because they weren’t prepared, they’re most likely to need rescues and supplies, and may even lose their lives and bring others down with them.

How can we avoid the normalcy bias?

We can’t avoid it altogether. But the quicker we move out of the Denial and Deliberation stages and into the Decisive Moment stage, the better.

Start by facing the facts. Even when given undeniable evidence, our brains can still take 8-10 seconds to absorb the information. After the initial shock, try to assess the situation with as clear a head as possible.

Consider all your options. Gather available information. Make plans for a variety of possibilities. It’s usually better to overprepare than underprepare. Leave room for margin.

Focus on what you need to do, one step at a time. Take each action as soon as it’s needed to avoid analysis paralysis.

Communicate with others. Don’t undertake surviving a disaster alone if possible. 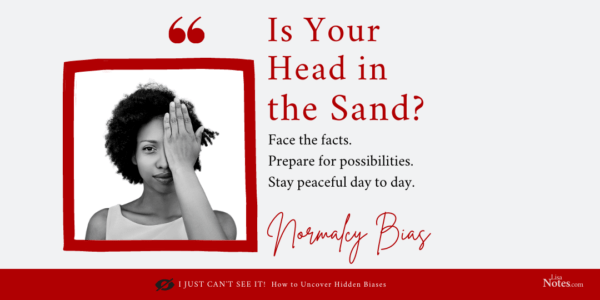 How did Jesus handle normalcy bias among his disciples?

Jesus’s disciples asked him privately, “What will be the sign of your coming and of the end of the age?” (Matthew 24).

Jesus gave them warning signs to be watchful for, such as rumors of wars, betrayal, and false prophets. But even with those, he said the actual day would come as a surprise.

So he told them to stay prepared to take action. If in Judea, run for the hills. If in the fields, don’t go home for your coat.

And finally, he told them that if they remained faithful until then, they would be blessed.

Jesus wanted them to be alert for disaster, but to stay peaceful day to day. To give, to pray, to fast, to forgive. And to love. Above all, always, to love.

It’s the best advice for us, too. We can’t predict what disaster awaits around the next corner (just ask Texas), but we can deal with the one we are in today.

The pandemic isn’t a disaster I could have imagined a year ago. That I’d still be wearing a mask to go to Walmart? That I wouldn’t eat inside a restaurant for a year? That I likely won’t get to be at the hospital for my grandson’s birth in May?

My head was in the sand. But my normalcy bias has since disappeared.

Yet even still, we can remain hopeful. Even in a pandemic.

And even in it, may we ever respond to each other with God, with love.

Are you prone to keep your head in the sand? What pulls you out? Please share in the comments.

You are on Day 24 of the series: “How to Uncover Hidden Biases.”

Previous: Confidence Bias {Bias Day 23}
“They’re So Confident, They Must Be Right”

14 thoughts on “Think It’ll Never Happen? Is Your Head in the Sand?—Normalcy Bias {Bias Day 24}”