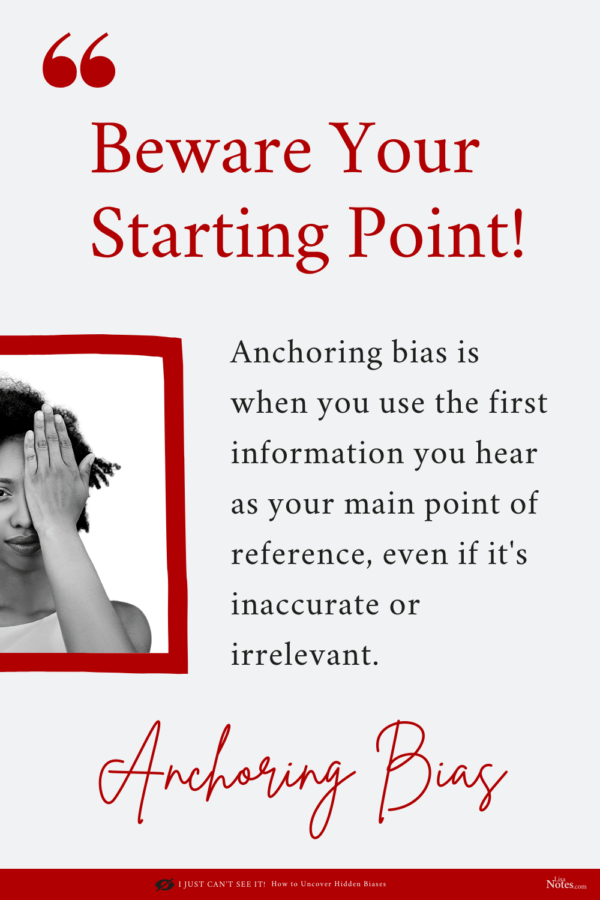 What is anchoring bias?

Anchoring bias (or anchoring effect) is when we anchor our decisions too heavily on the first piece of information we receive.

It’s our tendency to use this initial information as our main point of reference, even if it’s inaccurate or irrelevant. It can cause us to jump to a bad conclusion and be blinded to other possibilities.

What’s an example of anchoring bias?

Here’s an example given by Daniel Kahneman in his excellent book, Thinking, Fast and Slow.

“Supermarket shoppers encountered a sales promotion for Campbell’s soup at 10% off the regular price. On some days, a sign on the shelf said LIMIT OF 12 PER PERSON. On other days, the sign said NO LIMIT PER PERSON.

Another example: if you weren’t allowed to date until you were 16 years old, 16 becomes the anchor age you rely on for allowing your own children to date. 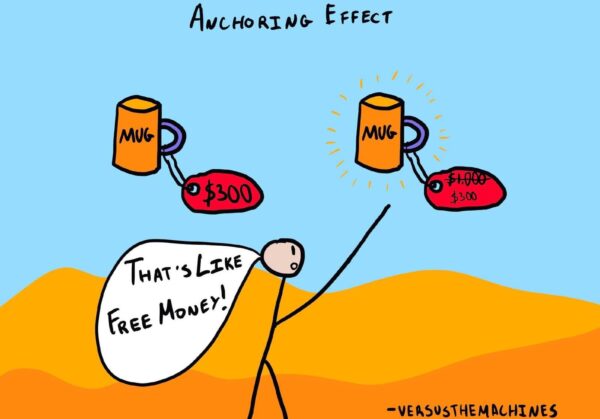 Why are we susceptible to anchoring?

It’s not clear why we’re prone to anchor. Experts disagree why, but all agree that we are. And strongly. This bias is among the strongest of our mental biases.

Different factors may affect our persistent use with the anchoring bias.

Anchoring isn’t always bad. It can be helpful to have a starting point as an anchor, if it’s a good one.

But overall, anchoring bias clouds our decision making. And because it’s such a pervasive bias, it often connects with other biases.

For example, the planning fallacy. Once we become fixed on our anchor plan (say, a 3-month schedule to remodel a kitchen), we are slow to budge from it, even when new information becomes available to suggest it’s no longer reasonable.

Anchoring can work against us in multiple ways. (And can also be used as a tool for manipulation.)

How can we counter anchoring bias?

It’s unlikely to totally counter this one. It generally stays hidden in our subconscious. But here are some strategies we can use in our attempts to interrupt anchoring bias.

What would Jesus think about anchoring?

Jesus is the one anchor we can rest securely on. He is the standard. All else revolves around him.

Humility, kindness, goodness—anything related to love—can start and end with Jesus, the solid anchor for our soul.

The anchor itself is an ancient symbol of hope. Our hope, our anchor, is based on God’s faithfulness and goodness. We can rely on him to keep us steady, regardless of the waves that come against us.

“We have this hope as an anchor for the soul, firm and secure.”
Hebrews 6:19

How have you seen this bias in your own life or relationships? Please share in the comments.

You are on Day 25 of the series: “How to Uncover Hidden Biases.”

Next: Biases in a Pandemic {Bias Day 26}
“Living (and Dying) with Our Biases During a Pandemic”