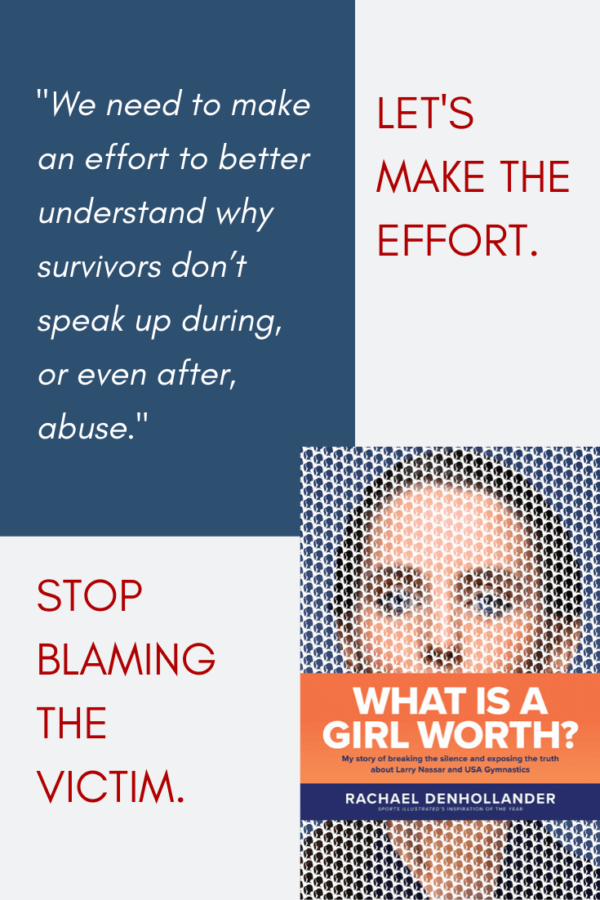 We hear the story. And we start wondering:

Maybe it’s because we think: If I avoid those things, I’ll avoid sexual assault, too.

But Rachael Denhollander was just a kid going to a doctor for a gymnastics injury.

And on her first visit, in street clothes in the middle of the day, sober, she was assaulted by Dr. Larry Nasser, a renowned doctor for the USA Gymnastics national team and a physician at Michigan State University.

“Don’t blame the survivor for not fighting back. They wish so much more than you that they could have.”

So next we ask ourselves:

Because, again, we think WE would do differently.

“And why did I not tell my mom? I didn’t know how to reconcile who he was supposed to be with what he had done. And I didn’t want to give it words. Words make it real.”

But in reality, we don’t know what we would do unless we are there ourselves. And Rachael explains what happened to her without us having to go there ourselves, fortunately for many of us.

“There weren’t just two responses to danger —fight or flight —as everyone casually said. There were three. Fight, flight, or freeze. I know what freezing in fear is now. It’s when you’re so confused and ashamed and horrified and scared that you just . . . shut down, because reality is incomprehensible.

“Why didn’t you cry out? Why? Because I trusted. I was a child. He was a doctor. He knows best. He had cared for me. He knew me. There had to be a reason. I must be reading too much into it.”

“You are not crazy. I wanted the survivors to know. This. Is. Not. Your. Fault.“

Rachael was among the first women to come forward about being sexually abused by Larry Nassar. She recounts her story and her journey to trial in her gripping book, What Is a Girl Worth?: My Story of Breaking the Silence and Exposing the Truth about Larry Nassar and USA Gymnastics. If you haven’t read it yet, I encourage you to. It’s a difficult book to read, but it’s an important one.

Rachael is wise, articulate, and authentic. She is an attorney, advocate, educator, wife, and mom. She stays on track with the storyline and she shares her strong Christian faith along the way.

“I want you to understand why I made this choice, knowing full well what it was going to cost to get here and with very little hope of ever succeeding. I did it because it —was —right. No matter the cost, it was right. “

She moves us to think. To feel. To act.

And to stop blaming the victim.

Because, as she asks the judge at Nassar’s trial before his sentence is determined, how much is a little girl worth? Everything.

“Good and right do exist. Truth does exist.”

Thanks to those who recommended this book to me. You were right about it.

13 thoughts on “Do You Judge the Victim? How Much Is She Worth?”