To tell you the truth, you probably don’t want to know.

My opinions are, well, only my opinions.

One of the scenarios we find ourselves in these days is this: we think we must share all our opinions with the world.

My church heritage taught me that the most important thing was getting the facts right, the TRUTH, which only we insiders possessed, btw. If you, too, grew up in a conservative religious environment, you probably know the phrase “speaking the truth in love.” It was used when someone was doing something that others didn’t approve of. And they needed to be told they were wrong. That they needed to “turn or burn.”

But the problem was it rarely worked. When someone administered a heavy dose of “truth,” it often lacked a weightier measure of “love.”

And truth without love is painful. 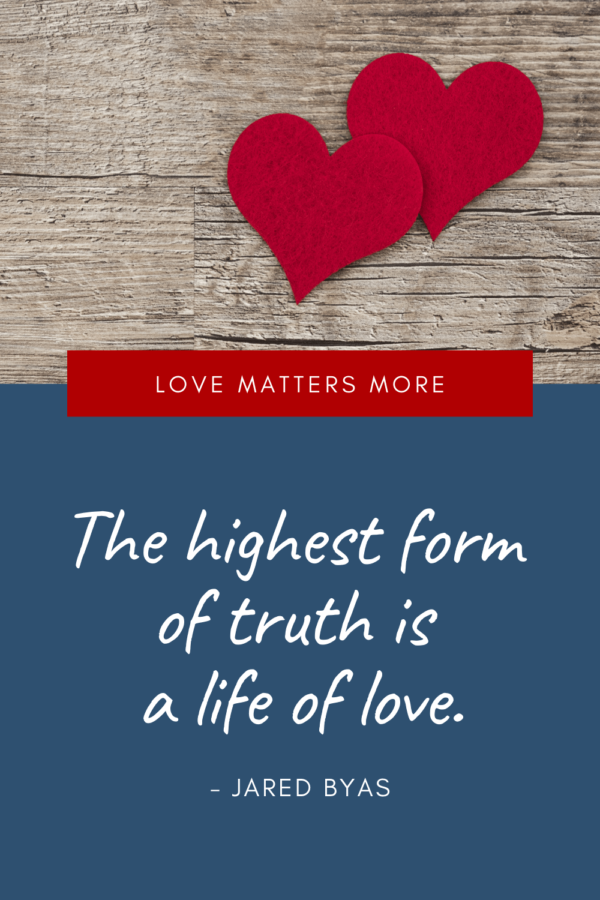 Here’s how Jared Byas explains it in Love Matters More:

“The ‘truth telling’ my friend received didn’t feel like love. There’s a word for people telling you they love you while what you experience is actually only pain and loneliness: abuse. And doing it all in the name of truth doesn’t change that.”

That doesn’t mean we don’t tell the truth. But it’s most important to get the love right. It’s what Jesus said was the first and second greatest commands.

And honestly? None of us understands all of truth anyway. (And especially not those who think they do.)

“A lot of Christians at this point will say, ‘What about the Bible? Doesn’t that give us access to absolute truth?’ And to that we say, no. Remember, absolute truth is getting to know everything there is to know about the world. Bible or no Bible— sorry, darling—that won’t ever be you because you have a small brain.” 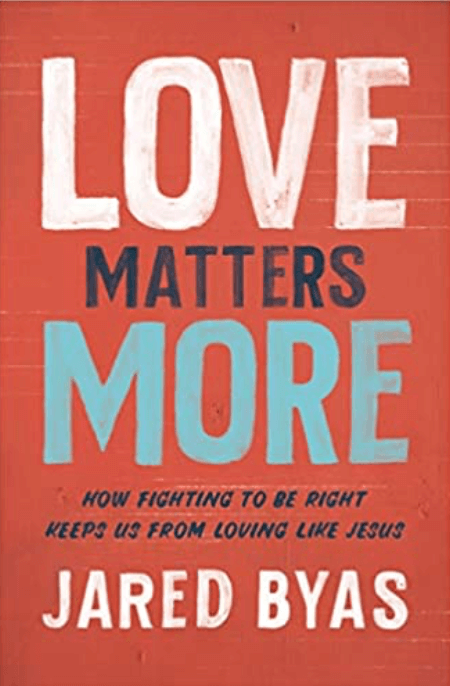 We really have to rely more on who we know than on what we know. Our what is too fuzzy. If you’ve ever argued with a spouse over something you just KNEW to be true, only to discover later that you remembered it wrong, you’ll know what I’m talking about.

“Faith is not certainty in what we know; it’s confidence in who we know.”

Does that mean we can’t be certain about anything? No. We all still have beliefs based on what we understand and have experienced. But we must hold it all with humility.

We don’t have to be obnoxious about truth after all.

I like how Jared explains it. He says he believes he won’t die in a car wreck tomorrow, though he can’t guarantee it. But he’ll act on his belief by getting in his car tomorrow and driving to work.

“The same is true about our beliefs in God or the Bible. Honestly? It just requires four little words: ‘I could be wrong.’

Say it with me: ‘I believe this thing. But I could be wrong.’ For bonus points, repeat after me: ‘You believe differently than me? Let’s grab some coffee sometime so you can help me understand more of where you’re coming from.’

And honestly, that’s the heart of my story. I went from being terrified of being wrong to saying, ‘I could be wrong.’ I don’t think that’s selling my soul to the ‘postmodern culture.’ I think (but am not certain) it’s called ‘learning humility.’“

Humility is at the heart of a healthy relationship with truth and love. Instead of putting all our attention on fact-finding, we need to work a little harder on responding in love.

“Knowledge and love aren’t at war. Love is clearly the queen, and knowledge her prince.”

Live for the Treasure, Not the Map

A final analogy by Jared is one I want to remember. He references the plot in National Treasure, when some mistook a map for the treasure.

“When we think that knowing facts is the end goal, we mistake the map for the treasure. Knowledge is a tool, a very important tool, to get to the treasure. We have to find a way to let it be important but not become the treasure we are searching for.

It is ironic that we are a culture obsessed with finding the truth, being convinced it will lead to love. I have found that truth is a poor guide toward love, and my energy is better spent living with the treasure than searching frantically for the map.”

Don’t mistake the map for the treasure. Truth may be the map. Truth matters.

But Jesus, Love personified, is the treasure. Love matters more.

I took many, many notes from Jared Byas’s excellent new book. I highly recommend Love Matters More (releases September 8). Jared is also the co-host of the “The Bible for Normal People” (a podcast I also recommend) with Pete Enns (he writes great books, too).

My thanks to Zondervan for the
digital Advance Reader Copy of this book.

15 thoughts on “Chase the Treasure, Not the Map
—Book Review of Love Matters More”