When’s the last time you did a turnaround on one of your opinions or beliefs?

Often it is painful when we’re in the middle phase between an old belief and a new belief.

It’s a season of doubt.

And we don’t like to feel doubt. My One Word for 2021 is Uncertainty; I don’t particularly like uncertainty. It’s more comfortable to be confident.

But we can’t always be right. Often our beliefs are just wrong. And that realization can hurt.

We shouldn’t take it personally when we discover we’re wrong. That’s part of growing up. We discard things we learn are inaccurate, and pick up things that are more true. It’s growth.

So when it comes to our faith, why are we so reluctant to acknowledge this process? As my own beliefs shift and grow through the years, I’d rather skip the in-between phase and just be transported to the opposite shore fully intact again.

But it doesn’t work that way. 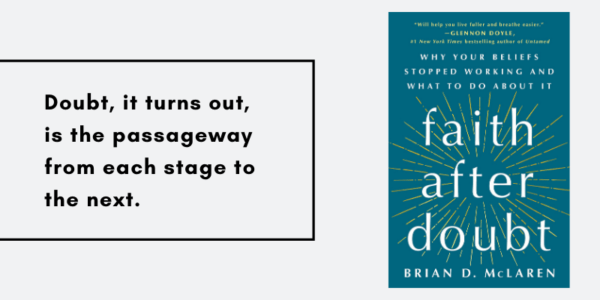 Brian McLaren wrote a book about it. It’s called Faith After Doubt: Why Your Beliefs Stopped Working and What to Do About It.

In it, he addresses the doubt that millions of people in the U.S. and around the world experience when their faith is shifting.

McLaren starts by saying this:

“You and I don’t have to keep our doubts a secret any longer.”

He frames doubt not as a fault or failure to be ashamed of, but as an expression of our humanity, and as an opportunity for growth in faith itself.

The book is organized in three movements:

Throughout the book, McLaren shows us that doubt isn’t a death knell to faith. Quite the opposite, it can actually be our saving grace as it shifts us more toward God and less away from shaky religion.

It isn’t an easy journey. And it isn’t always linear. McLaren describes our faith growth not as climbing a ladder or a stairway, but as climbing a tree with branches. He gives many other helpful analogies as well, including this one:

“Think of your current stage of faith as a base camp. On any given day, you might venture back a stage or forward a stage to cope with what life throws at you.”

The four stages of faith that McLaren posits are these:

They don’t come to us in a straight line. We may be in stage one in one area while in stage four in another area.

“Love isn’t like calculus, which can’t be taught until after one learns geometry and advanced algebra. No, love is more like music. We expose the youngest musicians to the most sublime music so that, as they learn the basics of scales, keys, tone, tempo, and timing, they know why the basics matter and what they can produce.”

And the end result we all want is love.

Here are simple prayers from the appendix that McLaren offers for each stage, but each prayer is good for all stages.

Note:
Maybe you’ll agree with McLaren’s personal beliefs in this book; maybe you won’t. Either way, the gist of the book holds true, which is to grow in your own faith, practicing what Paul wrote: “For in Christ Jesus neither circumcision nor uncircumcision counts for anything, but only faith working through love” (Galatians 5:6).

P.S.
My thanks to David for working through the end-of-the-chapter questions with me. I learn more when I read with others.

When has your faith made a shift? Was it uncomfortable? Share in the comments.

My thanks to NetGalley
for the review copy of this book