“The thrill of being right is undeniable, universal, and (perhaps most oddly) almost entirely undiscriminating. We can’t enjoy kissing just anyone, but we can relish being right about almost anything.”
– Kathryn Schulz

I’m often wrong about how many things I can do in a day (less than I think), about how long it will take to read a book (much longer), how (un)disciplined I’ll be about eating healthier.

But what does it feel like to be wrong?
We never know.

Because once we realize we’re wrong, we are wrong no longer. It’s past tense.

This is the problem of error-blindness. Whatever falsehoods each of us currently believes are necessarily invisible to us. Think about the telling fact that error literally doesn’t exist in the first person present tense: the sentence ‘I am wrong’ describes a logical impossibility. As soon as we know that we are wrong, we aren’t wrong anymore, since to recognize a belief as false is to stop believing it. Thus we can only say ‘I was wrong.’

Call it the Heisenberg Uncertainty Principle of Error: we can be wrong, or we can know it, but we can’t do both as the same time.”

Being wrong is a lot more complicated than I realized. And a lot more interesting. Kathryn Schulz’s book Being Wrong will be on my Top 10 list of favorite books read this year. 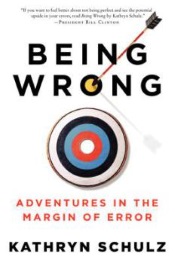 “For error to help us see things differently, however, we have to see it differently first. That is the goal of this book: to foster an intimacy with our own fallibility, to expand our vocabulary for and interest in talking about our mistakes, and to linger for a while inside the normally elusive and ephemeral experience of being wrong.”

See for yourself. Which is darker: the square labeled A or B? 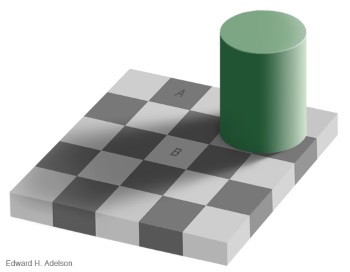 Would you believe they’re the exact same shade? (Don’t feel bad; I fought it, too.) 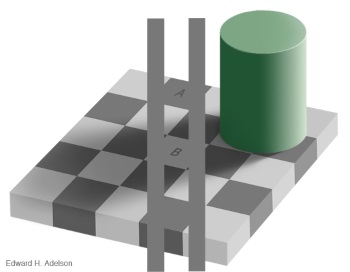 Obviously we can’t always depend on our senses to get things right. Schulz says, “Of the very long list of reasons we can get things wrong, the most elementary of them all is that our senses fail us.” And “. . . if we can’t trust our senses, how can we trust our knowledge?”

What about our memories? What were you doing on 9/11? We all remember. And we’re sure of it. But studies have proven even memories we know are accurate—such as details of momentous occasions—we still get things wrong more often than we realize.

“None of us capture our memories in perfect, strobe-like detail, but almost all of us believe in them with blinding conviction.”

Yet we hang on to believing we’re right; others are wrong. Why? Because those who disagree are either ignorant, idiotic, or evil. (Um, yeah. I grew up thinking this way about those who differed with my denomination. I apologize now.)

We assume that other people are ignorant because we assume that we are not; we think we know the facts, and we think those facts determine our beliefs. Put differently, we think the evidence is on our side.

It is almost impossible to overstate the centrality of that conviction to everything this book is about.”

So what can we do with our insatiable certainty that we’re always right? According to Schultz, we can . . .

1. Make peace with uncertainty.
Accept that there are things we don’t know, or even can know. We stop learning when we assume we already know it all.

2. Acknowledge (often) we might be wrong, even unaware.
See if you relate to this . . .

“Psychological studies have shown that people in shared living situations generally think they do more chores than their housemates, that people in relationships tend to think they try harder than their partner to resolve conjugal issues, and that each of the colleagues collaborating on a project typically thinks he or she is pulling more weight than everyone else.”

3. When we are wrong, don’t excuse it away.
Don’t say these things:

Not that we ever want to be wrong, but there are benefits. It makes us more empathic. It helps us be less judgmental. It helps us learn more about ourselves.

“Being right might be fun but, as we’ve seen, it has a tendency to bring out the worst in us. By contrast, being wrong is often the farthest thing in the world from fun—and yet, in the end, it has the potential to bring out the best in us. Or rather: to change us for the better.”

I still don’t want to be wrong. And I’ll never choose it intentionally (it’s the Truth that sets us free, after all!).

For more, watch Kathryn Schulz’s TED talk on being wrong

34 thoughts on “Being wrong”