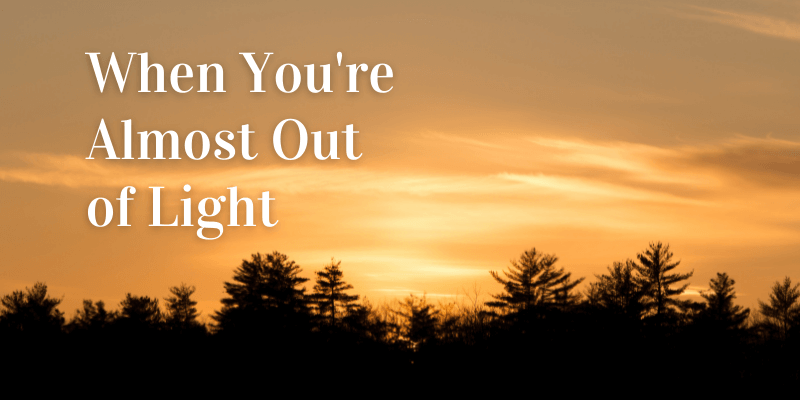 “I’m almost out of light,” he says. He’s sitting on the deck outside.

I hold it in. I say nothing. We’ve been in silent mode for about an hour already on this Friday night. He may have broken his silence, but I’m not ready to break mine yet.

But I do pull up a chair and sit outside beside him.

He is right. The light is fading. He finally closes his book. Not enough light to read by.

I look at the clouds, some dark, some wispy. All moving, all changing, leaving only pockets of light as the sun goes down in the west.

I shift in my chair and give a little. I speak. I mention I’ll go by the library tomorrow afternoon to return a book. He tells me about a frog he saw as he mowed the grass earlier.

Small talk. But it’s something.

The light continues to fade in the sky. A twinkle appears. I ask if it’s an airplane or a star. He says maybe a satellite.

Little by little, more stars appear. They’ve been there all along. They just couldn’t compete with the sun’s brilliance in the light of day. Now it’s their turn to shine.

He says he didn’t expect it to get dark so quickly.

Yeah, it can sneak up on you.

We don’t mention our heated discussion. We let it lie there, fade with the day.

It may rise up again in a new dawn, sometimes it does. But for now, we just let it go. An unspoken agreement as we stare at the stars and regain perspective of how small our problems are compared to the largeness of the universe.

I say I may go inside now and pop some popcorn. He says he may get a cup of ice cream. We enter the darkness of the house, flip a light switch, and resume our lives. Together, side by side.

Again in the light.

Relationships can be tricky. Certain issues we need to talk about again and again until they’re resolved. Other issues need to silently fade away and be forgotten. Wisdom means knowing which one is which.

As we get ready to touch our relationships with God and with other people in our Touch the Light 1 John 1 challenge, let’s notice God sending us sparks of light in whatever situation we’re in. Even on dark nights after the sun has set, the stars show up, one at a time, enough to see by until morning breaks again.

Which relationships are hardest for you? Share in the comments.

If you’re interested in joining our 1 John 1 challenge to read or memorize or study ten verses, get details here and sign up today.

21 thoughts on “When You’re Almost Out of Light”