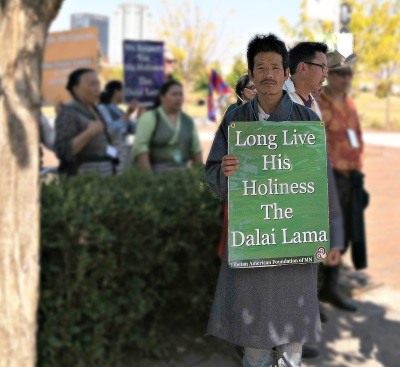 “That person is so compassionate.”

Who comes to mind for you?

For Christian believers, we might respond that Jesus is the ultimate example of compassion. And through many of his followers we can find clear examples of compassion today.

But God plants seeds of compassion—companions to seeds of love—in each of us.

One place that those seeds have grown is in the 87-year-old Tenzin Gyatso, known as Gyalwa Rinpoche to the Tibetan people, and to most of the rest of the world as the 14th Dalai Lama.

In my research on compassion for my Year of Compassion a few years ago, the Dalai Lama’s name came up again and again.

So when I heard in October of that year that the Dalai Lama was coming to Birmingham, only a couple hours from my house, I bought 2 tickets right away.

(Here stated, Jeff is an awesome companion to play along in my adventures. Here is his selfie with a photo of the DL.) 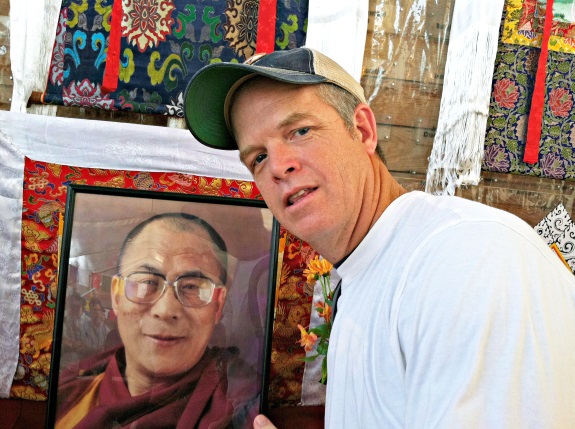 5 Things I Learned from the Dalai Lama

Here’s what I learned and what has stayed with me after hearing and watching the Dalai Lama that Sunday afternoon.

The man chuckles. A lot.

And because he laughed frequently and genuinely that afternoon, we did, too. Even though he spoke broken English and had a thick Tibetan accent and the audio at Regions Field wasn’t the greatest, it didn’t matter.

When he got tickled, it was contagious.

In the middle of his talk, the Dalai Lama pulled out a white cloth and did what he does in the heat of India: he put it on top of his head, snickered about his “special hat,” then kept on talking. He finished out his speech with this rag on his head.

Yes, keep the serious conversations going—the Dalai Lama sure did—but don’t take yourself too seriously. When you can bring joy into a situation, do.

Smile and laugh often to brighten the day for everyone.

“Since our human life begins with affection, affection is important all our life.”

That’s what the Dalai Lama said.

But I noticed even more what he did.

When he was talking on the stage with Birmingham’s then Mayor at the time William Bell, the Dalai Lama would often reach for Mayor Bell’s hand. And he’d hold on for quite awhile.

It was a great visual to see this Asian Buddhist monk from Tibet holding hands with this southern Black mayor of Alabama.

Make friends with whoever is near you, no matter how different you think you may be. 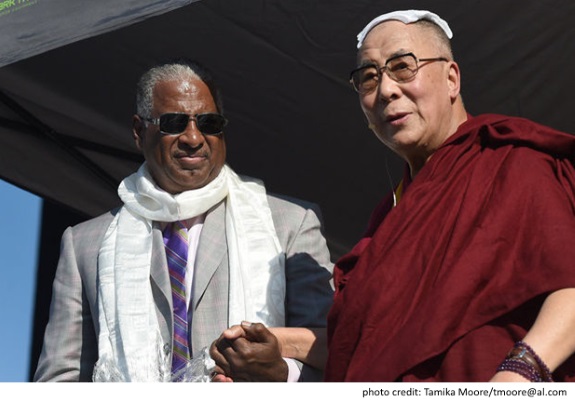 It was a hot afternoon that Sunday and the speakers’ stage was in full sun. A monk stood over the Dalai Lama with an umbrella to create shade.

But the mayor was several feet away. After a few minutes, the Dalai Lama noticed, stopped his talk, and told the mayor, “Come closer. It can cover both.”

So the two sat squeezed side by side under the shadow of one umbrella until someone else brought a canopy tent on stage that was large enough to shade them all.

If your comfort can cover you and somebody else too, make it happen.

Outside Regions Field before and after the event, a crowd of Buddhist monks and nuns handed out fliers, sang songs, and demonstrated against the Dalai Lama.

We asked a nun about it who had traveled here all the way from Canada just to protest. She explained to us that the International Shugden Community shows up wherever the Dalai Lama does to protest his disapproval of their Buddhist deity Doria Shugden.

But it didn’t shake the Dalai Lama.

Even amidst their disapproval, he kept his calm and stuck to his message of peace, the oneness of humanity, and promotion of harmony among all.

“Real source of happiness is not outside, but inside,” he said. 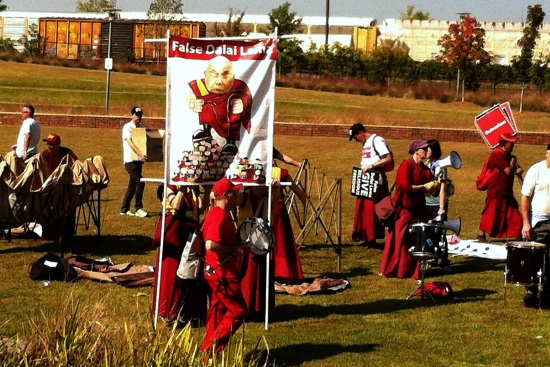 The Dalai Lama wanted us to understand how each of us depends on the rest of us. Even for his morning tea, he said, he depends on others.

We all come from the same creator and we all want to be happy.

He asked those below 30 years old to raise their hands. He told them that real hope in overcoming violence and hatred will be in their hands. “It is your responsibility to make a peaceful world,” to spread freedom as citizens in the leading nation of the free world.

“You seven billion human beings must work together.”

Yes, there were things I disagreed with as well. But overall, I discovered I had more in common with the Dalai Lama than I would have imagined.

He’s a living legend and lesson in compassion. 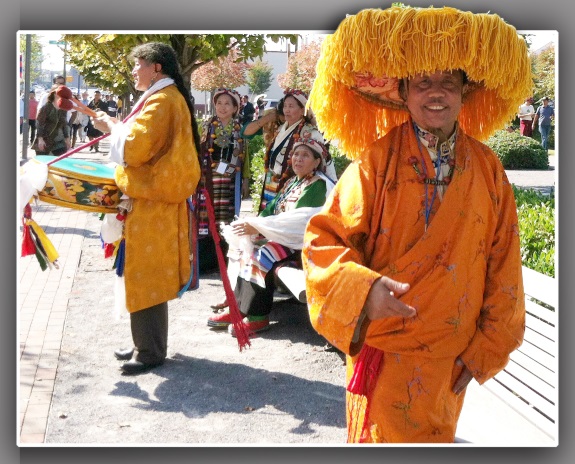 Who have you surprisingly learned from lately? What did they teach you? Please share with us in the comments.

43 thoughts on “5 Things I Learned from the Dalai Lama”