I thought it was just for me.
I was wrong.

Wednesday had been crazy already. We’d gotten up at 1 a.m. for a second day of airports, trying to get our daughter Jenna on a flight to Houston for her flight to Guatemala. The flights scheduled for Tuesday had been a bust, with one totally canceled flight and no make-ups. So Day 2 required an early morning 2-hour drive to Nashville International Airport instead of the 10 minute drive to our local airport. 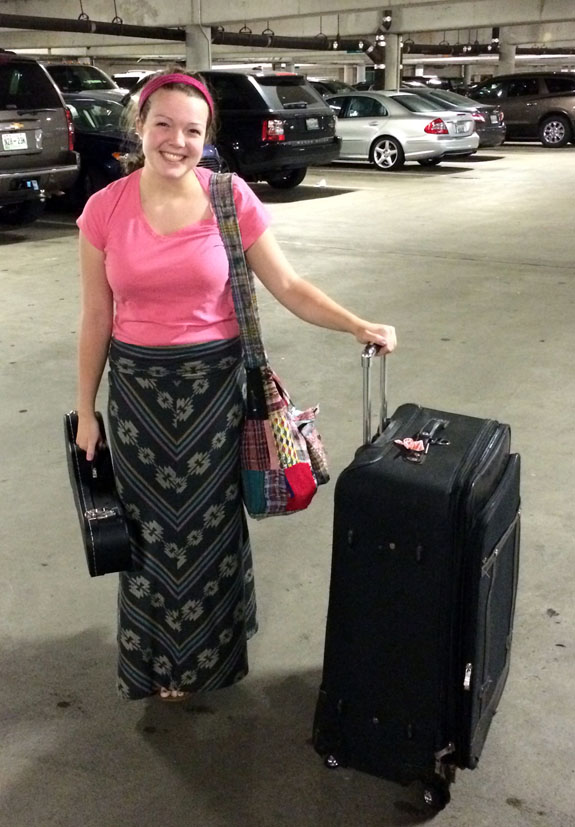 We watched Jenna check in, kissed her goodbye, and drove away. But before we were even off the airport grounds, she called. Her flight to Houston was delayed. That meant she’d miss her connecting flight (again) to Guatemala.

Why did this going away have to be so complicated, God?

Throughout the day, she’d text us with updates, including when she finally made it to Houston. But now she’d have to wait until nightfall to catch the only remaining flight to Guatemala.

We busied ourselves at home, waiting on time to pass to hear that she’d flown out of Houston and arrived in Guatemala City. But another delay came. And another. And another.

I opened The Soul of a Pilgrim, a book I’m working through during Jenna’s weeks in Guatemala. The passage for lectio divina that day was Genesis 12.

“The LORD said to Abram: Go forth from your land, your relatives, and from your father’s house to a land that I will show you. I will make of you a great nation, and I will bless you; I will make your name great, so that you will be a blessing.”
Genesis 12:1-2

Had I been Abram and Sarai, I would have tried bargaining. Why do we have to go? Why can’t we stay? Can’t we do this nation-building right where we are?

But the message from God to them was the same message we get today: Just go. That’s our part. He calls; we go; he makes us a blessing.

A good word, but what did it have to do with me in this season?

An hour later, I found out.

More texts from Jenna in Houston. She was worried. Mark, the local in Guatemala who would be meeting her plane, had specifically said arrive during the day, not the night. Would she be imposing on him, now that her flight was significantly delayed?

She contacted him about the changes, and he was gracious each time. He would still come, of course. But she felt bad and continued apologizing.

So I texted her back what God had just given me.

God’s call for you is to GO. That’s all. You are doing it.
His call to Mark is to pick you up. That is Mark’s offering of obedience.
Don’t feel bad about how the details play out.
Accept the gift with grace, not guilt.
Then let God make you a blessing to others.

It was the message straight from my lectio time in Genesis 12. MY lectio time. The time just between me and God.

But God doesn’t work that way.

When we spend time with God, it affects not only us.

What we hear, we tell others.

Therefore we should never feel guilty about private time spent with God. It’s not selfish.

But we should never be stingy with what he gives us during that time. It’s rarely just for us. It’s often for someone else, too.

We’re all in this together. Part of our journey is to support others on their journey. Keep passing the grace forward.

About 24 hours later, I received the important text I’d been waiting for from Jenna: she’d finally arrived in Guatemala about 12:15 a.m., Thursday morning. Mark and his wife were waiting on her. All was well.

I’m glad we journey together. God is with us all. And all is well.

When have you received a message that you had to pass along? Please share in the comments.

36 thoughts on “Your time with God? It’s not just for you”