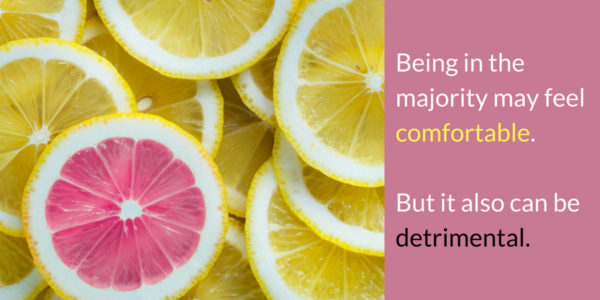 Jeff and I looked around us that Sunday night. Where was our generation?

We were among the oldest in the room.

(It still feels like a new phenomenon to us, but more people are younger than us than are older than us. The median age in American is 37.8 years old.)

But we also were among the whitest. The comedy club was featuring black Christian comedians this Sunday night (including KevOnStage, who is hilarious) and many (mainly younger) people were arriving to enjoy them.

Two nights later, we showed up at a community prayer vigil. While our age blended in easier, our color still did not.

There is comfort in being the majority. You don’t stand out. Eyes don’t turn your way.

But as the minority in a room, there can be discomfort. Like a white speck on black velvet, you might feel you should be picked off. Taken away for not fitting in.

Now I’m on the other side. On our praise team at church, I’m among the oldest. It sometimes feels awkward. I don’t want to stand out.

In some ways we are all a minority. There is no one else exactly like us. With our exact experiences. Our exact circle of friends. Our exact tendencies.

Being a true minority in this country is a feeling I have not known.

I’ve lived most of my life as a member of a majority group. As a middle-class, white, Christian, married American, I’ve grown accustomed to comfort. I can choose to be invisible in a crowd. Or if I prefer, I can use my voice and be heard.

Yet being in the majority can also be a detriment.

As the majority, we can be blind.

Jesus as a Minority

Jesus was born into a minority. As a baby, tainted with his mother’s reputation as either crazy or sexually permissive, he had to flee as a refugee to neighboring Egypt to avoid death. Later back in Israel, his Jewish religion placed him as an ethnic and religious minority in the Roman empire. As an adult, he befriended prostitutes, tax collectors, and “sinners,” while amassing hatred among religious elite.

But his largest difference?

Jesus was the only Son of God walking the earth. The only living human who was perfect. The only one who fully understood the Father’s will and carried it out.

And also the only one who most loved everyone. And who loved EVERY one the most.

If we’re not the minority, let’s pop our bubbles of sameness and notice those around us. See the colors. Celebrate the differences. Use our privilege for others’ advantage. Demystify the other by becoming the other.

And if we are the minority, let’s continue to share our stories. Be ourselves. Speak out. Reflect the image of God.

It’s how we grow more alike, more in knowledge of each other. We’ll also grow more in compassion. In kindness. In grace.

The more we learn how to love, the more people we’ll discover to love. Just like Jesus.

But we also laughed and talked and prayed. As one community. We saw friends we already knew, and met new friends.

Comfort is overrated. Color is different, but love is the same.

How often are you the minority in the room? Please share in the comments.

49 thoughts on “When You’re the Minority”