The seeds were packaged for 2008. I should have cleaned out the garage long ago and thrown them out. But I didn’t.

Only this spring of 2013 did I plant them. I expected little if anything.

If I were to get a bloom, I’d be amazed.

I do that when I plant seeds.
I’m never sure if it’ll matter.

I’d been planting seeds for months with a man named Ronald. I’d seen him come through the line at Manna House enough to recognize him week after week. He’d often stop by the clothing room to ask for a shirt for his young daughter or a pair of shorts for his son. Always friendly, always thankful.

After a few weeks I could finally remember his name (yeah, it takes me awhile) and greet him with a smile and eventually a hug. Maybe a “How are you this week? I’m glad to see you.” Nothing much. Things you learn in Be Nice 101.

No special week in particular I did the same thing again.

But two weeks later, Ronald intentionally sought me out at Manna House. He had something he’d been wanting to say.

He told me how sometimes he shows up at Manna House feeling down. Two weeks ago in particular he was very discouraged. And then he saw me and I gave him a smile and a hug. And that was just what he needed. It turned him around and gave him a lift that changed everything.

He’d been wanting to tell me how much it mattered.

A bloom.
From old seeds.
Tiny little things I thought were powerless.

That’s the beauty of gardening with God.

When he lays down the Miracle Grow, things happen. He makes no guarantee to show us what fruit may bloom. And we can’t demand to see it.

Because now and again, we do see a bloom. And our faith will bloom with it.

My packet of seeds from 2008? It actually produced flowers.

And I was amazed. 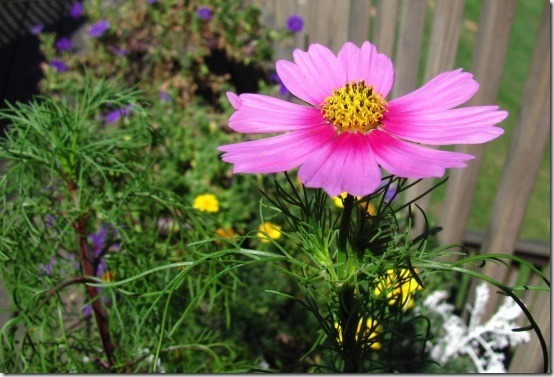 Do you ever feel like your little seeds are nothing? Then you see God grow something with them? Please share.

14 thoughts on “When old seeds bloom”