He had made spring rolls a couple weeks earlier and brought them to our English as a Second Language class. But I wasn’t there that week. With no time to make homemade rolls again this Thursday, he bought some from a local Vietnamese restaurant.

He pulled out the takeout box for me to have.

Vietnamese food is an unknown to me. I’m not adventurous in the food department. I like what I like. I have enough favorite foods already; why would I need to try new ones?

But having a Vietnamese friend was once an unknown to me, too. 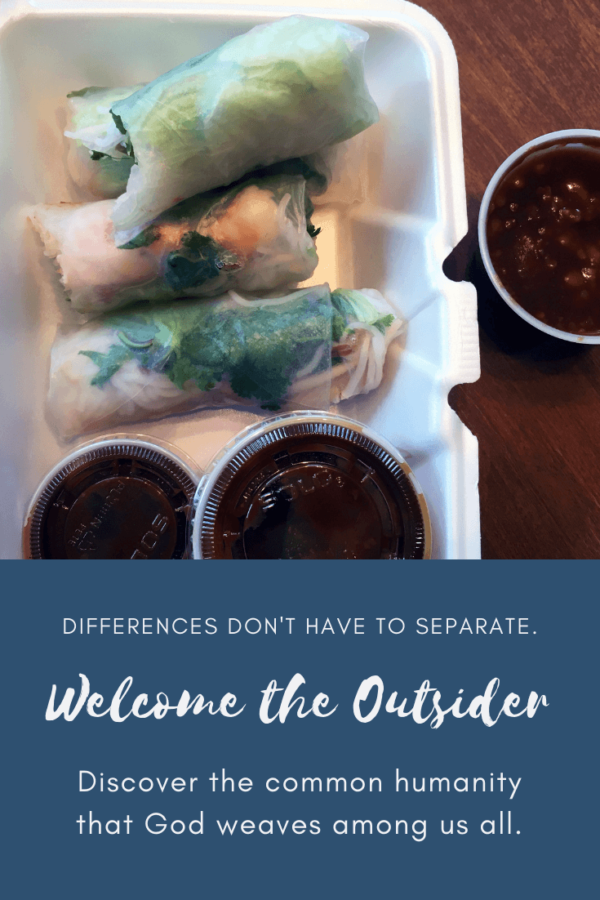 When New Is Uncomfortable

Brian isn’t his original name. It’s the name he gave himself when he came to America a few months ago from his home in Vietnam. It’s easier to say.

When I wanted to learn how to pronounce his real name anyway, he laughed and gently told me it would be too hard. I could just call him Brian. He liked that name.

Learning new things can be uncomfortable. Meeting new people even more so. Especially when you speak different languages. It feels rude to ask someone to repeat a word over and over because you can’t understand what they’re saying. Or to be asked in return to speak slower because they’re lost.

Differences often separate us. It’s hard to jump the hurdles to find commonalities. It takes energy and motivation. And time.

To practice his English, Brian prefers real conversations with a native speaker instead of learning through a workbook. So for an hour and a half each Thursday night, we talk.

We work on his pronunciation skills (the th sound is hard for him) and I explain definitions of words he’s unsure of (like meteorologist). But we do so through natural discussions about the differences and similarities in our two cultures of America and Vietnam. Weddings, clothing, schools, food, family, holidays, religion.

It Goes Both Ways

The story of the tower of Babel in the Old Testament says that all people once spoke only one language and used the same words. But when they became too cooperative in building a tower to heaven—they wanted to make a name for themselves—the author of Genesis 11 writes that the Lord was unhappy. So he “confused the language of all the earth.”

Our languages—and cultures—have remain confused for thousands of years.

Even though our sounds differ, our minds search for similar information, our hearts feel the same emotions, our souls want the same connections.

One word at a time, one conversation at a time, the teacher/student dynamic breaks down. Now it’s more friend-to-friend.

The teaching and learning don’t go one direction, but back and forth, round and round.

Despite the hindrances, we can overcome barriers and reconnect in meaningful ways for the glory of God instead of for human pride.

Granted, it takes more effort to understand each other when we don’t sound the same. We have to think harder, lean in, listen closer.

Welcoming the outsider often feels awkward. But we’ve all been the stranger.

Just as God has welcomed us into the family, we too are meant to extend hospitality to the strangers around us. To help others feel at home.

Our efforts are worth it when we discover the common humanity that God weaves among us all.

I opened the takeout box to try a spring roll. It looked as foreign as it was. I timidly dipped a corner of the rice paper into the sauce. Brian urged me to dunk it more fully. I tried it.

It was good, but it tasted alien to my American tastebuds. I would need a few more bites.

When I got home, I encouraged Jeff to try one, too. He did. The culture was spreading. We’d never had Vietnamese food in our mouths—in our house—and now we had experienced it.

It was no longer an unknown.

20 thoughts on “Welcome the Outsider”