In this classic from C. S. Lewis, he says if we want to wake up to what God wants to do in us, we have to learn humility.

How? By trying to be good—and failing. And by realizing that every gift we give, first comes from God. 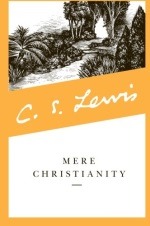 You may remember I said that the first step towards humility was to realise that one is proud.

I want to add now that the next step is to make some serious attempt to practise the Christian virtues. A week is not enough. Things often go swimmingly for the first week. Try six weeks. By that time, having, as far as one can see, fallen back completely or even fallen lower than the point one began from, one will have discovered some truths about oneself.

No man knows how bad he is till he has tried very hard to be good.

A man who gives in to temptation after five minutes simply does not know what it would have been like an hour later. That is why bad people, in one sense, know very little about badness. They have lived a sheltered life by always giving in.

We never find out the strength of the evil impulse inside us until we try to fight it: and Christ, because He was the only man who never yielded to temptation, is also the only man who knows to the full what temptation means—the only complete realist.

Very well, then. The main thing we learn from a serious attempt to practise the Christian virtues is that we fail.

. . . God has been waiting for the moment at which you discover that there is no question of earning a pass mark in this exam, or putting Him in your debt.

Then comes another discovery.

Every faculty you have, your power of thinking or of moving your limbs from moment to moment, is given you by God. If you devoted every moment of your whole life exclusively to His service you could not give Him anything that was not in a sense His own already.

So that when we talk of a man doing anything for God or giving anything to God, I will tell you what it is really like. It is like a small child going to its father and saying, “Daddy, give me sixpence to buy you a birthday present.”

Of course, the father does, and he is pleased with the child’s present. It is all very nice and proper, but only an idiot would think that the father is six-pence to the good on the transaction.

When a man has made these two discoveries God can really get to work. It is after this that real life begins.

The man is awake now.

4 thoughts on “How to wake up – from Mere Christianity”