Pain is not the enemy, but the loyal scout announcing the enemy. . . . And yet only by learning to master pain can we keep it from mastering us.
– Dr. Paul Brand

While this book isn’t specifically about faith and spirituality, it is as much about it as any other.

Dr. Paul Brand writes this memoir about his experiences in helping others deal with pain and deal with painlessness (which often has more deadly consequences).

If you read his book through the lens of not only physical suffering but any type of suffering, much can be learned about how God can redeem our attitudes about pain.

Excerpt from Pain: The Gift Nobody Wants 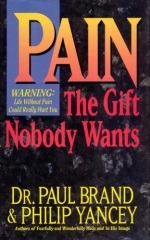 My professional life has revolved around the theme of pain, and by living in different cultures I have observed at close hand diverse attitudes toward it.

I served my medical internship in London during the most harrowing days of the Blitz, when the Luftwaffe was pounding a proud city into rubble. Physical hardship was a constant companion, the focal point of nearly every conversation and front-page headline.

Yet I have never lived among people so buoyant; now I read that 60 percent of Londoners who lived through the Blitz remember it as the happiest period of their lives.

After the war I moved to India, just as Partition was tearing the nation apart. In that land of poverty and omnipresent suffering I learned that pain can be borne with dignity and calm acceptance.

It was there too that I began treating leprosy patients, social pariahs whose tragedy stems from the absence of physical pain.

Later in the United States, a nation whose war for independence was fought in part to guarantee a right to “the pursuit of happiness,” I encountered a society that seeks to avoid pain at all costs. Patients lived at a greater comfort level than any I had previously treated, but they seemed far less equipped to handle suffering and far more traumatized by it.

Pain relief in the United States is now a $63-billion-a-year industry [this book originally published in 1993], and television commercials proclaim better and faster pain remedies. One ad slogan bluntly puts it, “I haven’t got time for the pain.”

Each of these groups of people—Londoners who suffered gladly for a cause, Indians who expected suffering and learned not to fear it, and Americans who suffered less but feared it more—helped to form my outlook on this mysterious fact of human existence.

Most of us will one day face severe pain.

I am convinced that the attitude we cultivate in advance may well determine how suffering will affect us when it does strike.

7 thoughts on “Attitudes about pain”