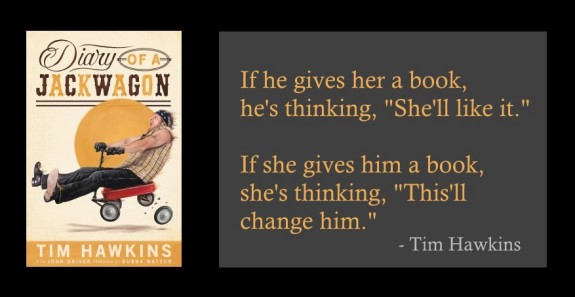 But if something is really funny, you’re too busy laughing to say, “That’s funny.” It’s just obvious.

There are many funny things in Tim Hawkins’ new (and first) book, Diary of a Jackwagon. But then there are moments when I couldn’t even read a section out loud to Jeff because I was laughing too hard. That’s when you know it’s funny.

I kept waiting for the definition of “jackwagon” in the book since it’s in the title. I never saw it; I guess I was supposed to already know. Jackwagon is an insult implying laziness or worthlessness. [Watch a video here of Tim explaining it.]

But if you’ve ever seen or heard Tim Hawkins’ comedy on YouTube or in person, you know that he’s anything but a jackwagon. His jokes are clean, insightful, and often hit close to home.

We saw him perform at our church a year or so ago, and probably haven’t laughed that hard for that long since then. While the book isn’t a substitute for hearing him tell the jokes himself, it’s the next best thing. Some of the material was familiar to me, but most of it was new.

Here’s a short clip to warm up your funny bone before reading some excerpts below from the book.

[If you can’t see the video above of “Tim Hawkins on Turning 40”, click here]

Excerpts from Diary of a Jackwagon

On Bible stories we tell children:

“Daddy, I’m scared!”
“Ah, you’ll be fine. Now, grab a brush and paint some screaming people on that rock over there. It’s going to be great. Hey, first go look in your baby sister’s room—I painted the stoning of Stephen. You’re going to love it.”
“Are those birds, Daddy?”
“No, those are glow-in-the-dark locusts coming to get you when the lights go out.”
Nothing like laying a strong biblical foundation for the kids.

When I was first married, I thought all we needed was two pillows on the bed. Obviously, that is not nearly enough. I was shooting way too low. I suppose I was thinking like a human instead of thinking like a woman. But I adjusted and listened to her unspoken needs. Now, we have exactly thirty-seven pillows on our bed and she couldn’t be happier. We don’t even need a mattress anymore. We just have pillows stacked four deep creeping toward the center from the four corners of the box springs.

“Now Timbo, we are praying a hedge of protection around you, buddy. That’s right, mmm hmm. Around you and your whole family.”

A hedge, huh? I don’t mean to complain, but is that really the best you can do? How about praying a thick cement wall with some razor wire on top of that bad boy? A hedge of protection sounds like it is one good pair of clippers away from being removed—and I’m sure the devil’s got a pair of those lying around the old Sheol Shed. . . .

Satan’s minions gather round to bemoan the shrubbery’s impenetrable might. “My greatest weakness is landscaping. How did they know? Move that bush!” End scene.

* Whenever I want to be left alone, I go to the mall and hold a clipboard.
* You “Save the earth” people can go ahead and use one square of toilet paper. I’m gonna keep wrapping it around my hand like a beehive.
* This just in: I heard that scientists are working around the clock in a groundbreaking attempt to engineer a sugar-free Krispy Kreme donut. What’s the point? We have that already. It’s called a bagel. Leave it alone, Donut Man.

I think we parents should pool our collective resources and create a new theme park for kids. Instead of Disney World, we’ll call it Third World. We’ll drop them there for a few weeks and see if they don’t come back with a little more perspective. I could just hear their theme song playing through the speakers built into plastered rocks all over the park, “It’s the Third World after all . . .” It would be just like Hunger Games, except with less fun and more violence.
“Daddy, I want a Happy Meal!”
“We’re at Third World. You’ll be happy to get a meal, son.”
“Daddy, is that Snow White and the seven dwarfs?”
“No, that’s a missionary and seven pigmies. Move along.”
“Look, Daddy. It’s Mickey Mouse!”
“No, that’s a giant rat. Run for your life!”

It’s nice to be able to whole-heartedly recommend a book. I can do that with Diary of a Jackwagon. No caveats. No disclaimers. Just pure funny.

Have you ever watched Tim Hawkins? What do you think? Share in the comments.

My thanks to BookLook Bloggers for the review copy of this book.

16 thoughts on “Review of Tim Hawkins’ book, Diary of a Jackwagon”