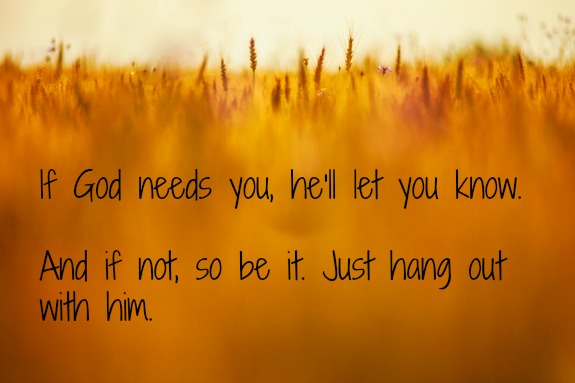 You can count on this: If it’s a bitter cold day, the library will fill up. With the homeless. Those who have nowhere warm to go.

That Wednesday was our coldest day yet. I stopped by the library to grab a book, eat some chocolate, and drink a Diet Coke in between errands in town. You have to go to the lounge on the 2nd floor for that.

I’ll tell you what to expect up there. The unexpected.

God went in first. I knew that. People were already gathered around the wooden tables sitting in the plastic chairs.

And the only person in the room that you’d label “normal” was the Coke machine guy doing his restocking.

Finally he could take no more. “Excuse me,” with an edge he started talking to the Coke machine guy. “There are some people here using crass language and they need to stop. Will you handle that?”

I looked up. What would the Coke guy do? The two men by the door just laughed. I assumed they were the ones referred to.

The poor Coke guy. He glanced up, barely, and muttered some response. Not much. He sped up his work and got out of there fast.

It crossed my mind to leave, too. I didn’t mind hanging out there, but I didn’t want to get caught in the midst of a brawl. Not prepared for that. Ever. But I stuck around anyway.

The white guy with the girl stood up and stretched. The black men kept talking, laughing. The sandwich guy kept eating.

I finished my coke, folded up the other half of my Dove bar for tomorrow, and walked back into the world of books.

Just as God had gone in first, I knew he’d stay to the last. That’s what he does. He’s got this.

When he needs us, he’ll let us know.

So why had I been there? No idea. Maybe just to observe. Maybe for someone else to observe. Like many other places I’ve found myself the past two years, I’m just showing up. When God wants more once I’m in, I find out about it.

I’m finding contentment in letting him do his thing. Stopping my overanalyzing. Releasing the hyper-responsibility to change things.

Sometimes the most important thing we can do is just be present. Trust God to handle the rest. That was enough that day in the library.

When have you found doing “nothing” was the right thing to do? Please share in the comments.

37 thoughts on “Sometimes you do nothing”