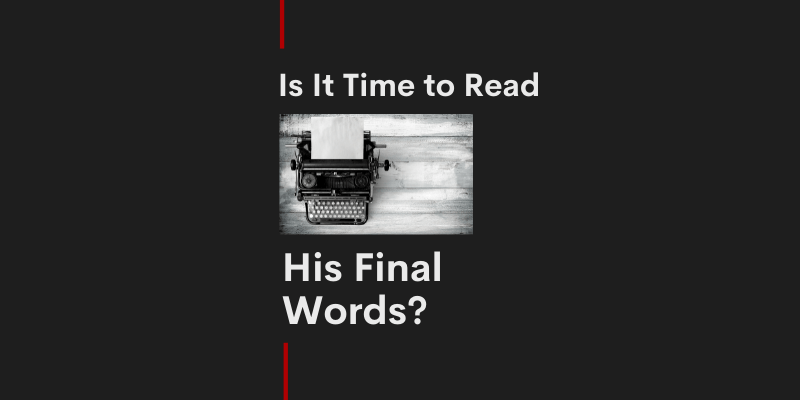 I suppose most little girls think their dad is the smartest in the world.

I thought that. My dad was a mechanical engineer who worked for NASA his whole career. But he was also a Bible teacher at our church.

And because of that, my dad was also a Bible student.

He spent many, many hours of his adult life studying the Bible, preparing to teach a Sunday school class or just exploring it for his own knowledge. As I was growing up, I’d often see Daddy sitting at the kitchen table with his Bible spread open, a pad of paper and pens nearby, poring over the scriptures, highlighting a verse and making notes as he read.

When he became abnormally tired and thin in late 2009, he had been working on a massive Bible project: writing his own commentary of sorts on the New Testament book of Romans.

Romans was his final big study.

Early in January 2010 my dad received a diagnosis that explained the changes in his body: lung cancer.

But somehow, through it all, he brought his Romans’ project to completion, enough anyway to save as a digital file and to email to a few readers for input.

After my dad died on Valentine’s Day in 2010, we had to sort through all his papers. He had file cabinets full of sermon notes, Bible study notes, and all manner of words that he’d written through the years.

The Romans project? We got it off his computer and put it on a thumb drive.

I began reading it shortly after he died. But then I stopped. I wanted to save it.

I wanted to keep something out there yet unread from my dad.

I still haven’t finished reading it.

It’s comforting to me to know I still have some of his words ahead of me, something new I’ve never heard from him, something fresh to look forward to from my dad.

But how long will I wait?

I think I shouldn’t wait any longer. It’s been 11 years already. It feels ridiculous even saying that large number, that he’s been away from us for 11 years already when he is still such a strong presence in our lives.

Perhaps this summer I’ll dig up Daddy’s document on Romans. And start reading it again. Hear his voice again. Learn something new about him. About God.

And maybe learn something new about me, too.

Lois linked up a post at last week’s linkup that reminded me I still hadn’t finished reading my dad’s work on Romans. She shares insights in the post about her own dad’s death, about his collection of writings, and about life in general.

Read all of Lois’s post here at her blog, then link up your own blog posts below.

What things have you saved from a loved one who has passed?

4 thoughts on “Is It Time to Read His Final Words?
—Grace & Truth Linkup
”