Rather than have Blacks swim in their public swimming pool, the city of Montgomery, WV, hired city contractors to pour cement into the pool over 50 years ago.

Racism is costly to everyone. Not only to the people on the receiving end of it. It’s also costly to those on the giving side; they just don’t always recognize the price they pay to cause harm.

“Did white people win? No, for the most part they lost right along with the rest of us. Racism got in the way of all of us having nice things.”
– Heather McGhee

The Sum of Us is a detailed look at how racism costs everyone, and includes the fuller story about the public swimming pools.

“Public goods, in other words, are only for the public we perceive to be good.” 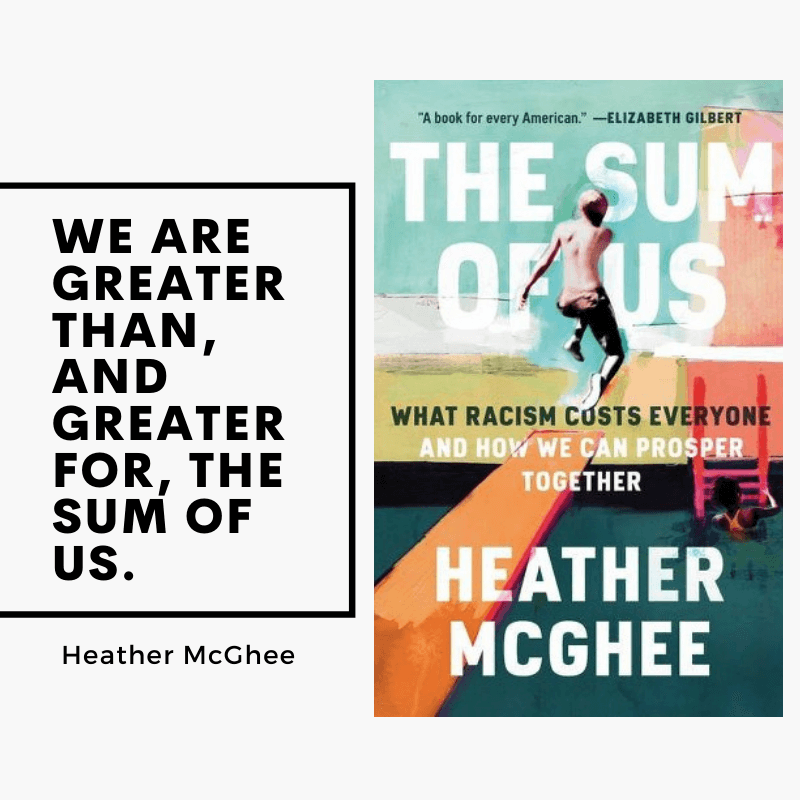 The author Heather McGhee digs down to the core of our public problems, and finds racism there.

If you’re into data, McGhee offers plenty of it in The Sum of Us. But she also provides individual stories of people she met who are living through these issues.

“Some white people even believe that Black people get to go to college for free—when the reality is, Black students on average wind up paying more for college through interest-bearing student loans over their lifetimes because they don’t have the passed-down wealth that even poorer white students often have. And in selective college admissions, any given white person is far more likely to be competing with another white person than with one of the underrepresented people of color in the applicant pool.”

McGhee says on our self-destructive path of racism, we take down both people of color and white people, too.

“The narrative that white people should see the well-being of people of color as a threat to their own is one of the most powerful subterranean stories in America. Until we destroy the idea, opponents of progress can always unearth it and use it to block any collective action that benefits us all.”

And when we cooperate instead?

“The civil rights victories that were so bitterly opposed in the South ended up being a boon for the region, resulting in stronger local economies and more investments in infrastructure and education. The old zero-sum paradigm is not just counterproductive; it’s a lie.”

What’s the alternative to a zero-sum game? The Solidarity Dividend. It’s McGhee’s label for the gains we all reap when we unite, instead of divide.

The Sum of Us shows us we’re not in competition against each other. Your wins don’t come at my expense, nor vice versa. We’re all in this together.

“We are so much more when the ‘We’ in ‘We the People’ is not some of us, but all of us. We are greater than, and greater for, the sum of us.”

6 thoughts on “Racism Hurts Everybody, Not Just Its Victims
—Book Review of "The Sum of Us"”