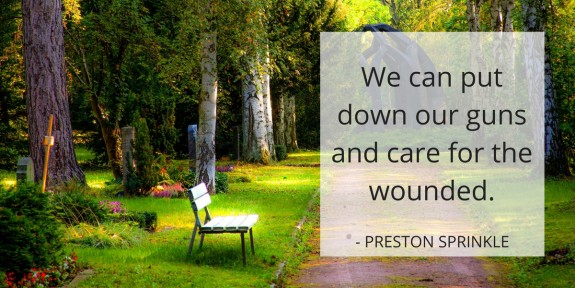 Why do we listen? Why do we read?

Sometimes we do it to affirm a position we already believe. We like being right; we enjoy hearing others agree with us.

But sometimes we need to listen to others to see if what we’re believing is wrong.

I picked up People to Be Loved: Why Homosexuality Is Not Just an Issue because I appreciated the title. I didn’t know which way the book would lean. 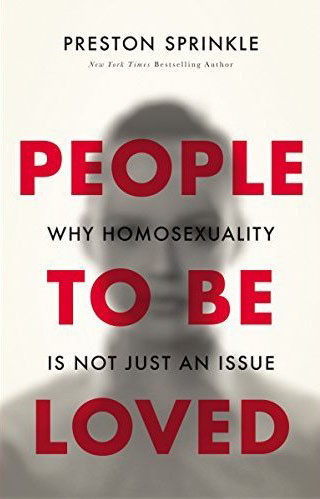 Christians often have a bad relationship with the LGBT community (unfortunately, often earned), for treating others as an issue instead of as a person.

“Here’s the thing: most people who are attracted to the same sex don’t end up leaving the church because they were told that same-sex behavior is wrong. They leave because they were dehumanized, ridiculed, and treated like an ‘other.’”

If you’re straight, talk to your own friends, family members, coworkers, and fellow church-goers who are gay. Ask how they’ve been treated by Christians. Many gay people turn away from believers instead of toward them because they feel more hate than love.

We also hurt God’s reputation to outsiders because of our attitudes and even our own infighting when we can’t peacefully disagree. Sprinkle doesn’t say believers have to give up their convictions, but they need to work on their kindness.

“It’s not too much truth but too little love that’s driving gay and straight people away from the bride of Christ.”

But we can change this.

First, Sprinkle wants to educate. He writes at length on six passages in the Bible about same-sex relationships, about origins of Hebrew and Greek words, and about sexual practices of early cultures.

On his section translating 1 Corinthians 6:9 and 1 Timothy 1:10, he values study to this degree (you may agree or disagree with him):

“If you’re not willing to perch up in your chair, roll up your sleeves, and turn your phone off for a couple hours to study these two words [malakoi and arsenokoites], then I’d say you should not form a strong opinion about homosexuality. When asked what you think, at least be honest and say, ‘I’m not too sure, since I don’t want to take the time to understand what the New Testament actually means.’”

While Sprinkle ultimately sides with the non-affirming position that homosexuality is wrong, he still lays out arguments for the affirming position, and often warns readers not to jump to conclusions on either side when they interpret scripture.

He’s careful not to say, “I’m right and you’re wrong,” but makes statements like this throughout the book:

“Like you, I am on a journey. Maybe in five, ten, or fifteen years, I will have a better answer, or maybe I will have changed my mind on the answers I give in this book.”

But Sprinkle did more than spend time researching books and words to write this book. He used the other half of his time in the lives of gay people.

“And my life will never be the same. I have made many unexpected friends whose stories have seeped down into my bones.”

Sprinkle then offers multiple suggestions for how we can improve our relationships, regardless of how we interpret the Bible, including these three actions.

Cultivate an inviting environment for others to talk.

“The Christian church needs to get past the ‘us’ (straight people) versus ‘them’ (gay people) mindset.”

“I still think there is room for dialogue and fellowship with those who hold different views on this topic.”

Listen to people face-to-face. Listen to books on all sides of the issue (not just ones you agree with). Listen to stories online.

Listening doesn’t mean you have to agree (with anybody on anything), but it does show that you care.

Speak out against gay jokes, belittling slang, incorrect information. You don’t have to be argumentative about it, but with compassion and respect help make the world a kinder place.

“Homophobia refers to the dislike of or prejudice against LGBT people. When an LGBT person grows up in the church, they usually encounter homophobia—feeling that they are disgusting in the eyes of the Christian God because they have been treated this way by his people. We need to put homophobia to death.”

If we can love people—all people—as Jesus did, we will be a truer representation of Christ in the world. We will have improved relationships with our friends who are gay. We will have a more compassionate reputation among non-believers.

And we will be more honoring to our Father, the one who made us to love each other, not to fight amongst ourselves.

In the end, I don’t agree with all of Sprinkle’s biblical interpretations. But I know I don’t have to fight him over it. He’s someone I could meet for lunch and have an invigorating discussion but still walk away as friends. His tone is gentle and grace-filled.

We all can agree on this: It is critically important to maintain an attitude of respect toward all people. We need to demonstrate loving behavior, whether we believe the same things or not.

As Sprinkle so beautifully states:

“We can put down our guns and care for the wounded.”

Who listens best to you when you need to talk? Please share your thoughts in the comments.

My thanks to NetGalley
for the review copy of this book

15 thoughts on “People to Be Loved – Book Review”