“Jeeves is my man, you know. Officially he pulls in his weekly wages for pressing my clothes and all that sort of thing; but actually he’s more like what the poet Johnnie called some bird of his acquaintance who was apt to rally round him in times of need—a guide, don’t you know; philosopher, if I remember rightly, and—I rather fancy—friend. I rely on him at every turn.”
– P. G. Wodehouse

I didn’t know what to expect from My Man Jeeves. I’d heard that author P. G. Wodehouse was funny; that’s it. 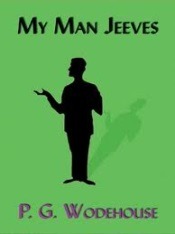 So what I got was a surprise.

For starters, My Man Jeeves isn’t just one fictional story; it’s a collection of short stories. Secondly, it’s not all about Jeeves—the wise valet (think Mr. Hughes, you Downton fans; or Ask Jeeves, the internet search engine) to Bertie Wooster—but also includes stories about other unrelated characters. And thirdly, it is definitely British (to this American anyway).

I liked it; I recommend it. I already put it on Jeff’s Kindle because I think he’ll appreciate the light-hearted stories and the style of wit, too, even though he, like me, may not always understand the terminology.

An interesting sidenote: My Man Jeeves was published as a book in 1919 in the UK, but all the short stories were first published in periodicals both in the US (The Saturday Evening Post) and in the UK (Strand).

Here’s a sampling of Wodehouse’s writing style from My Man Jeeves. Enjoy.

“She fitted into my biggest arm-chair as if it had been built round her by someone who knew they were wearing arm-chairs tight about the hips that season.”

“I didn’t ask for details. Women with hair and chins like Mary’s may be angels most of the time, but, when they take off their wings for a bit, they aren’t half-hearted about it.”

“I was stunned by the man’s resource. ‘It’s brain,’ I said; ‘pure brain! What do you do to get like that, Jeeves? I believe you must eat a lot of fish, or something. Do you eat a lot of fish, Jeeves?’
‘No, sir.’
‘Oh, well, then, it’s just a gift, I take it; and if you aren’t born that way there’s no use worrying.’
‘Precisely, sir,’ said Jeeves. ‘If I might make the suggestion, sir, I should not continue to wear your present tie. The green shade gives you a slightly bilious air. I should strongly advocate the blue with the red domino pattern instead, sir.’
‘All right, Jeeves.’ I said humbly. ‘You know!’”

This book fits neatly into two of my 2014 Reading Challenges (yay!):

Have you ever read any of Wodehouse’s works? What did you think?