“Then something special happened.

Somehow this collection of words morphed from being the Lord’s Prayer to becoming a model of prayer for me. They went from being an object for rote recitation to something alive. It became a model for teaching me not only how to pray, but also how to live. They became words not for the inside of a building but words for all parts of life. There were words about forgiveness, temptation, and dependence on God—the things I wrestle with daily.”
– Bruce Green, Praying in the Reign

My copy of the book opens with this: 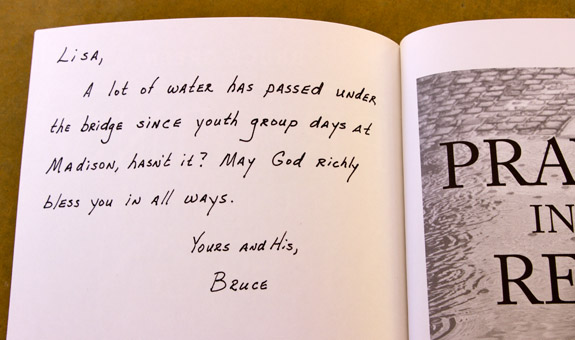 Bruce was one of my youth ministers (if we used that term back then) when I was a teenager, even though looking back, he wasn’t much older than I was. But he was one of my favorites. He and another of my favorites, Barry, held many a devotional on weeknights in the back of Barry’s feed-and-seed store in downtown Madison (back when it was a quiet little town). We’d sit around on feed bags and listen and talk about Scripture and Christianity.

But now that we’re grown up, we rarely see each other. So I was delighted to sit at his feet again in his book Praying in the Reign about the Lord’s Prayer. 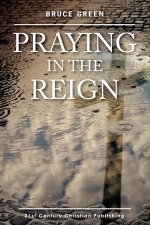 He breaks it into seven sections, then subdivides these even further, with theological explanations but also with demonstrations of how the Lord breathes and moves behind the words.

“It is not a formula of words to be mindlessly repeated, but a spiritual pattern to guide and shape us. It is not an end in itself, but a means of leading us into a deeper righteousness.”

Because I recite this prayer aloud at the end of every session of my Centering Prayer time, I appreciated hearing a fresh perspective on the individual phrases. For example . . .

“It’s worth noting that ‘Father’ is the way in which God is most often spoken of in the New Testament. The one and only God is our Father. That is how He wishes to be known because that’s what He is.”

“For example, take the little word ‘for,’ which connects the doxology with the last part of the prayer about being delivered from evil. We pray this prayer of deliverance because (‘for’), ‘Yours is the kingdom.’ God is able to deliver because He rules!”

Although Bruce states in the Foreword that his purpose here is not “to prod you into praying more often or with greater intensity (although that could be a good thing)”, I’m certain that purpose is accomplished more times than not, thankfully. Along with his stated goal: “What it does seek to do is to reach out and grab you in regard to the glory of our Father and the greatness of His kingdom. It seeks to help you understand more of what it means to allow Him to rule in your lives.”

Just as I remembered, Bruce is still very intelligent, still good with words, and still very kind. I’m grateful to connect with him again (even if one-sided this time) through this book.

Here are some more quotes:

“At our prayer meetings we were acting as if prayer was entirely about telling God what we wanted. There wasn’t any malice or menace involved; we had just sort of drifted into this. Unless there is great intentionality, I think this is what prayer often becomes because it is the path of least resistance. We pray about what comes most natural to us—telling God what we want.

…We seemed to have forgotten that no circumstance is omnipotent. Our Father has the ability to sustain people in any situation. What happened in our intercession often happens in our personal prayers. They end up as negotiating sessions about getting our circumstances changed rather than being expressions of our trust in His power to see us through them.”

“So I ditched the word ‘dependent’ for ‘desperate.’ If someone is desperate for something, they have to have it. They can’t survive without it. The Psalmist says, ‘As the deer pants for streams of water, so my soul pants for you, O God’ (42:1). We are more than dependent upon God; we are desperate for Him.”

“Typically in our speech (if not in our thinking), we reserve the phrase, ‘God answered our prayers,’ for those times when God has brought about the results we desired. We mean well by such a statement. We mean to bring glory to our Father and recognize what He has done. But the truth is that these words can be a poor way of expressing our understanding of prayer as well as God’s work. It can also crush the spirits of others, because it sounds as if we’re saying He hasn’t answered the prayers of those who didn’t get the results they desired. That we mean no such thing isn’t the point.”

“I think we are to understand that when we submit to Christ, we enter into not just the kingdom (John 3:5), but we take our first step into heaven as well.”

Praying in the Reign is available here if you’re looking for a deeper meaning behind this model prayer. Or read sample pages here. Bruce provides two or three thought questions at the end of each section, so it would also work well in a group setting. Bruce and his sweet wife Janice can be found in person in Opelika, Alabama, where he is a teaching minister. You can read his blog here.