Tomorrow, my husband Jeff will finish his last regular work day. And come home to stay.

Officially, he’ll still have a few days of work here and there during the next two months. He won’t be completely finished until July, but this is his last full week. He’s thrilled.

But I almost ruined it.

And I’ve about driven Jeff crazy.

A few weeks ago we were preparing supper in the kitchen. We began one of our talks about retirement. We each held our cool with each other’s approach for as long as we could.

But one new thing surfaced. And it changed everything.

I heard that it wasn’t just me who was a little nervous about the changes ahead.

Jeff was a tad scared, too. But not for his own sake, rather for mine. My talk of preparing for both the good and the bad of retirement made him question if I *wanted* him to retire at all. He was afraid that I wouldn’t be happy having him home.

While we have had versions of that conversation in the past, that day I finally heard it differently.

Because I finally understood this: It’s not my job to regulate Jeff’s expectations.

Previously, my fear was that Jeff would have his expectations set too high for retirement, and that he would be disappointed when it didn’t live up to all the hype.

And I saw my role, with the best of intentions, was to remind him not to get his hopes up too high for retirement fun.

But he didn’t need that.

While my personality is to plan for all the possibilities, that’s not Jeff’s personality.

I enjoy the present more when I use it to prepare for the future (basically). That works for me.

But what works for Jeff is to enjoy the present while it’s here, and deal with the future when it gets here (basically). 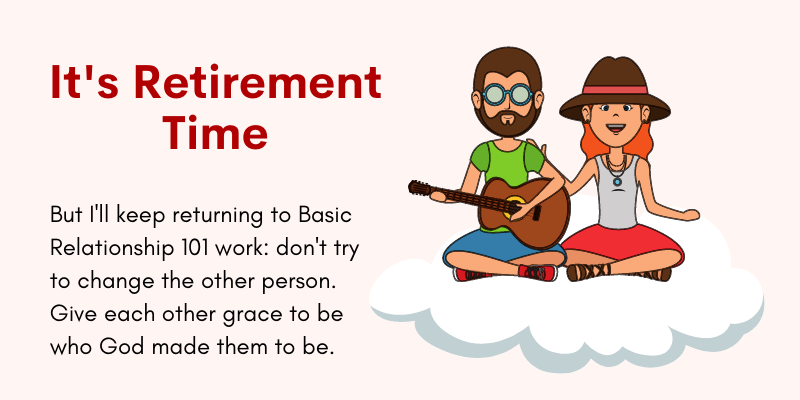 So if I wanted Jeff to get the optimum pleasure out of his pre-retirement weeks, I needed to stop trying to lower his expectations about retirement. He’s a grown man; he knows it won’t be perfect. I didn’t have to keep pointing it out to him, just to make myself feel prepared.

Once I realized this, our conversations about retirement radically improved.

And now here we are. We’ve almost made it.

As we work out the kinks of having a lot more time together, I’ll keep returning to Basic Relationship 101 work: don’t try to change the other person. Give each other grace to be who God made them to be.

And it’ll all work out in the end.

Share your thoughts (and any advice about retirement!) in the comments.