It was too early to be awake.

But the clock didn’t shine long. Suddenly everything went black. All electricity had shut down.

My mind raced to the morning’s agenda. It was Sunday. That meant getting up early to shower, eat pancakes, then head to choir practice before worship services began.

But with no electricity, I’d take a cold shower and keep wet hair. And forget the pancakes. And would we even have church? Their power supply was the same as ours.

I drifted in and out of sleep, weighing pros and cons of possible plans.

In the end, it didn’t matter. The electricity came back on, just in time for me to get up and start the day (with pancakes).

But he’d concluded it wouldn’t matter.

Because the presence of the Lord isn’t dependent upon our creature comforts. Jesus always shows up wherever and whenever his believers do.

And to prove the point, during the middle of morning worship, he had all the lights turned off. The musical instruments shut down. The place was silent.

And God was present. His Spirit was thick. As always.

Another Sunday. I woke up, got ready (but no pancakes since Jeff the pancake man was sick), and left for choir practice.

But walking into the church building, I noticed it was dark. No electricity. Two Sundays in a row, we’d lost power. Jeff texted me, confirming the same just happened at our house.

This time the electricity did not come back on before services began. Instead, we lit 50 candles, rallied the acoustic guitarists, and welcomed Holy Spirit among us.

It was a beautiful service. With or without electricity . . .

At the end of the service, with eyes closed and heads bowed, Pastor Mark invited those who didn’t know Jesus, to get to know him.

And the power clicked. The lights came on. At just that moment. (I know that sounds corny or made up, but maybe God really wanted to drive home his point? I just know it’s what happened.)

It’s the climate I want to stay in. This now of God’s presence that permeates our atmosphere.

Because plugged or unplugged, the Lord stays on. 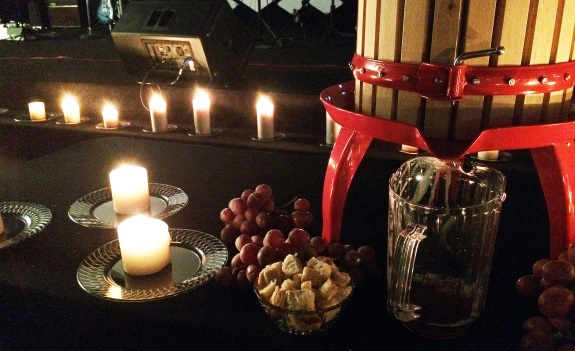 Have you had a cool experience with God lately? Please share in the comments.