Should We Always Avoid Confrontation?

Are we retreating deeper into our separate corners instead of staying in common, open spaces?

Are we losing communication with people who don’t think like us?

I find myself sometimes shutting out the opposition altogether. If someone frustrates me on Facebook or constantly believes the “wrong” thing on Twitter, I mute them or temporarily snooze them for 30 days (I highly recommend this feature on FB).

And maybe that’s okay. It’s just social media, after all. I need to protect my mental and spiritual health, as well as my relationships. Sometimes stepping away from the chaos is the right thing to do.

But should I avoid all confrontation in real life, too? 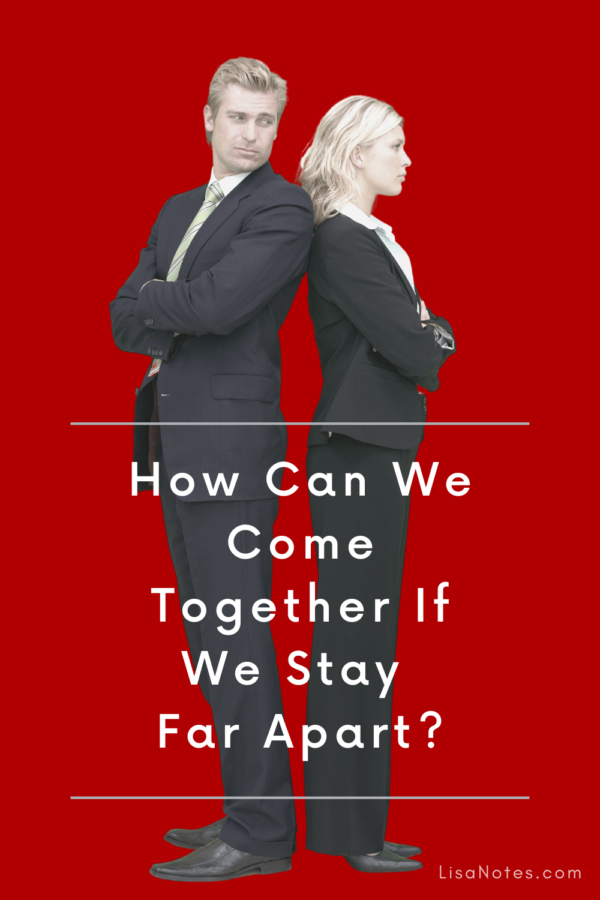 When we rub against each other in person (not literally of course; this is 2020), our opinions can provoke harsh thoughts from others, or worse, harsh words.

But should we shut it all down? Stop talking about things if we disagree?

If we can’t talk to each other, hash it out, even get noisy about it when we’re too exasperated for anything else (Lord, forgive us), what’s left?

How can we come back together if we stay so far apart?

I like staying in my bubble. It’s comfortable there. No conflict. No disagreements. No ugly-stirrings-inside-me that I have to calm down.

But my bubble is small. And the world is large.

If we’re to love the world, we have to puncture our bubbles and go into the world.

Let’s not run away from the people we disagree with.

Still in the Same Family

In Eugene Peterson’s short devotional, A Month of Sundays, he talks about the two brothers in the Parable of the Prodigal Son. Peterson points out that when the older son talks to his father, he refers to his younger brother as “This son of yours,” instead of “this brother of mine.”

“But when he denied brotherhood, he also forfeited sonship.”

Please don’t let this be me. I don’t want to forfeit my sonship because I deny my brotherhood.

Remember we are still members of the same family. We still have the same Father.

We are still brothers and sisters. Let’s not give up on each other.

Let’s linger together a little longer.

Are you struggling, too, with people on the “other side”? Share how you’re coping.

11 thoughts on “How Can We Stay Close If We Don’t Communicate?”