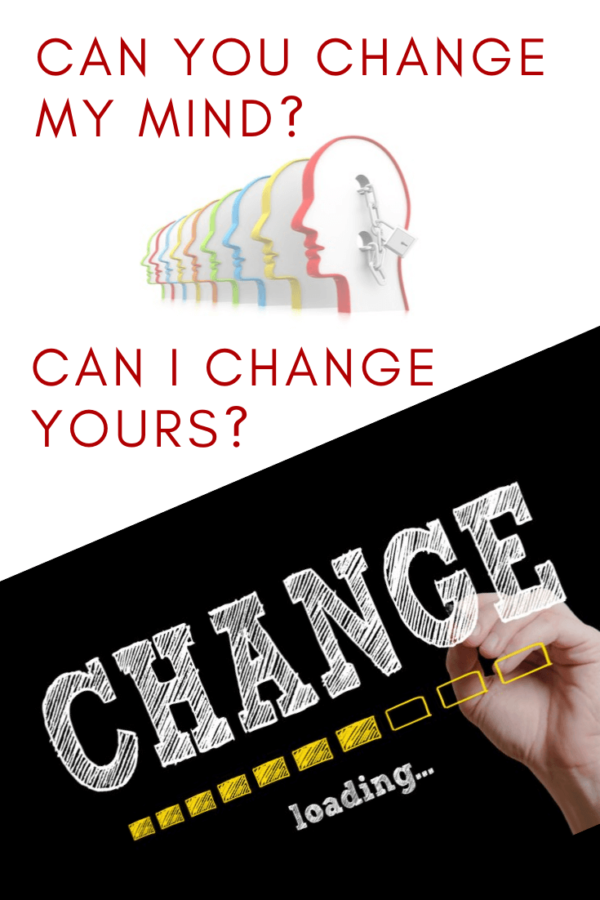 I knew we’d disagree. My friend’s position was clear. I understood because I used to believe it myself.

But I had changed. I saw no indication that she had. So, what now?

We’re usually told to keep listening and keep talking it out when we disagree. And sometimes that works. Sometimes it changes someone’s mind when they hear a new bit of evidence. Or when they hear a backstory they’d previously missed.

But frankly, often new information does NOT change anyone’s mind. We find ways to get around it, we dig in to our original position, insisting (at least in our heads) that our opinions and beliefs are right; theirs are wrong.

It’s not rational. But it’s reality.

This book’s title caught my eye: Stop Being Reasonable: How We Really Change Our Minds. I heard the author, Eleanor Gordon-Smith, interviewed on a podcast episode of This American Life, in a segment called “Hollaback Girl.”

Gordon-Smith was sharing her conversations with men in Australia who catcalled women. Despite showing statistics to the men that most women hated having sexual innuendos shouted at them from the street, and that it was an ineffective strategy for picking up women, most men continued to believe that women really loved the public remarks from strangers about their bodies.

After trying in vain to convince them otherwise, this finally dawned on Gordon-Smith:

In this era of division in America, we think we can change people’s minds with the right words. With the right piece of evidence. If we just present the right link to the right article on our Facebook page, all our opponents will see the light.

But it rarely happens that way.

Gordon-Smith doesn’t present antidotes in her book like I wanted her to. Probably because there aren’t any magic answers. Barring a God-miracle, there aren’t any guaranteed, sure-fire methods to change minds, either our own or others. We each base our opinions on our individual mix of emotion and memory and interpretations.

“Anyone who says they have a persuasive strategy that will change a person’s mind without first knowing their circumstances or the genealogy of their beliefs is either lying or grievously mistaken.”

But Gordon-Smith does offer in her book six interesting case studies, some stories which show people do change their minds (a cult follower), and some in which they don’t (the catcallers).

In each case, what is “reasonable” ends up as a matter of perspective.

And that is our starting point.

Can we ever change each other’s minds? Maybe.

But don’t depend on it.

I continued listening to my friend talk about her belief.

Then I threw in what I thought were cold, hard facts.

Surely this indisputable evidence would sway her.

We’d have to leave it at that. For now anyway.

Maybe in time—with more experiences, more reflection, maybe even more facts—we could come closer to agreeing again. It is possible to change our minds; we all have done it. We’ve all thought we were right about something, only to realize later we were wrong.

But for today, our friendship wouldn’t rest on consensus, but on trust.

Maybe those things aren’t reasonable either.

But it’s what we’ve got.

And that is enough.

What is most likely to change your mind? When is the last time you changed your mind about something important? Please share your thoughts in the comments.

12 thoughts on “Can You Change My Mind? Can I Change Yours?”