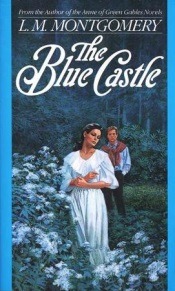 The Blue Castle is a delightful novel by Lucy Maud Montgomery, author of Anne of Green Gables, about 29-year-old spinster Valancy Stirling who early in the book makes a drastic change in her life.

Valancy’s transformation is fun to watch, especially if you’re like me and deal somewhat with fears and worries yourself (thus relating to Valancy).

“Fear is the original sin,” suddenly said a still, small voice away back—back—back of Valancy’s consciousness. “Almost all the evil in the world has its origin in the fact that some one is afraid of something.”

Unlike many older novels, this one keeps a brisk pace. But like others, vocabulary can gap so I occasionally had to look up words new to me. Montgomery also sprinkles in several biblical references if you notice those things, although in general she casts a dispersion on Christian hypocrisy.

“Cissy Gay is dying,” she said, “and it’s a shame and disgrace that she is dying in a Christian community with no one to do anything for her. Whatever she’s been or done, she’s a human being.”

. . . Oh, Valancy, what you’ve been to me! I can never tell you–but God will bless you for it. I know He will—“with what measure ye mete.”

Near the end of the book, I was caught off guard by some of the plot twists, which I attribute either to Montgomery’s skilled writing or to my naiveté.

I heartily recommend this book to adults and youngsters alike for a fun look at living life while you’re alive instead of dying through others’ expectations.

Do you have a favorite older novel? A favorite L. M. Montgomery book? Leave a comment here.

19 thoughts on ““The Blue Castle”–Book review”